With all that talk about cakes and pies and pancakes you might start to wonder what on earth happened to my Weight Watchers diet, but rest assured… I am still going strong and have lost 3 kilo in the first two weeks, so I am quite happy about that. Most of the cakes and pies we made have been given away to family and friends although I – ofcourse – had to taste some of it myself!! That actually turned out a bit too much but the damage has been limited… 🙂 I’ve taken up sports again too and try to go to the gym three times a week for a spinning class or cardio session. And… I’ve ordered zumba dvd’s which should arrive today. I’ve heard so much about it, that I want to give it a try. Starting of in the privacy of my own home, as I don’t really want to embarrass myself publicly… haha!

So I am quite proud of my achievement sofar and I’ve been eating healthy and quite well in the process too. I think that is one of the good things about trying to lose weight; it gives me also another reason to spend hours going through cookbooks and thinking what I can create or adjust to suit my purpose. WW is extremely flexible and I love the fact that doing sports or other activities actually makes me gain extra points which I can then use to add – for instance – a lovely bit of roquefort to this gorgeous salad. It’s a simple but tasty salad and you could easily substitute some of the ingredients or add others to it. The original did not call for tomatoes but I thought they would work really well here and they did. It added just an extra layer of juiciness to the mix. So wonderful lunch salad and if you’re worried about the roquefort; it’s worth the indulgence as without the saltiness and creaminess of the roquefort, this would be much less interesting. 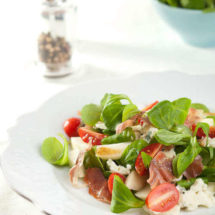 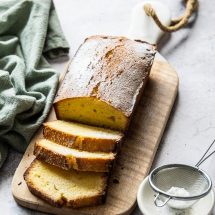