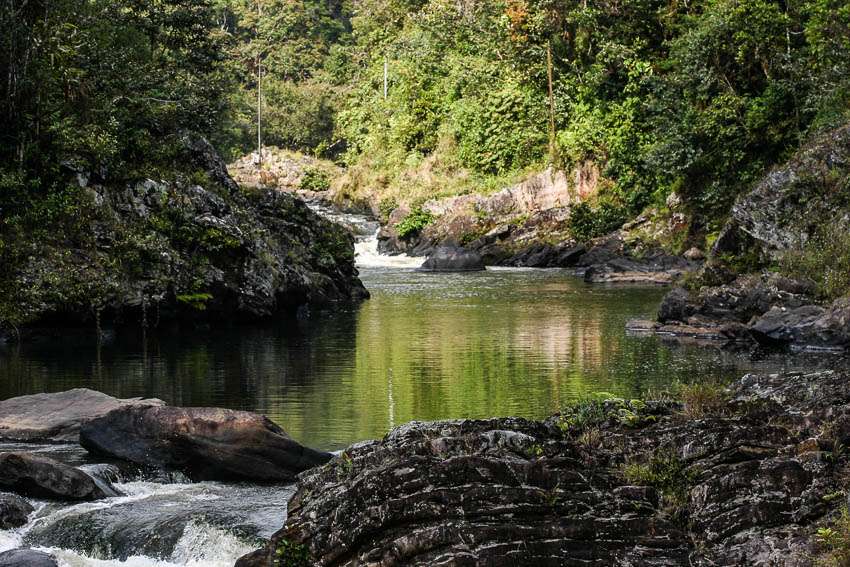 On our way to Ranomafana from Ambositra the clouds quickly gathered together. The closer we got to our final destination, the worse the road became and the darker the sky. And just before we got to the hotel the rain started pouring down. And when it rains in Africa, it rains! On top of that, the roads quickly become very slippery and well, best not to think about that too much. But I couldn’t help and be very relieved when we arrived at our lodging. 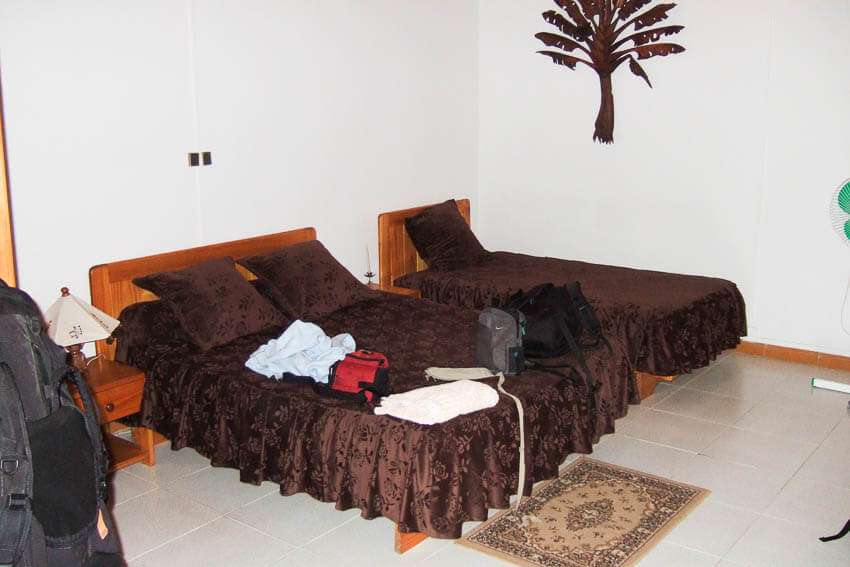 Our room was very large and in terms of luxury, very luxurious for African standards. And let’s face it: you do not go to Madagascar to expect an enormous amount of luxury do you? We were mostly happy when our room didn’t have too many creepy crawlies going around at night. And this one was really fine. And – also rather important – it had a fan. (you can just see it peeping into the picture above)

Because of the downpour we decided to have our dinner in the hotel instead of in town. It was really too wet outside. We stayed in  Hotel Centrest, which is a good choice (at least it was in 2005 when we were there) as the hotel is not too far from the main entrance of the parc plus the surroundings of the hotel were gorgeous. You stay in small bungalows around the garden and the main attraction is the same garden. In it you will find a whole lot of wildlife; beautiful insects, lots of spiders and frogs and if you’re lucky a chameleon or two. 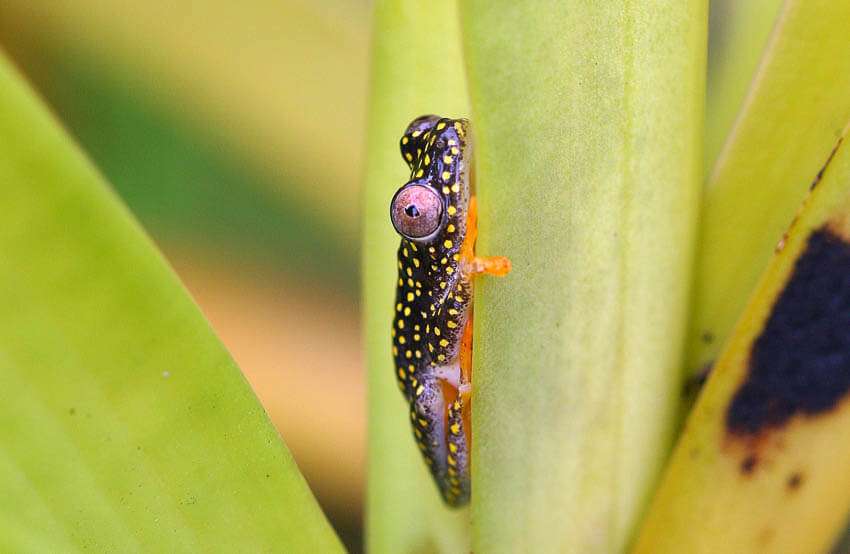 The food in the hotel was fine so it is an acceptable choice if you’re stuck because of bad weather. We had to go to bed early anyway as our hike through the parc was scheduled for 7 am the next morning. It would be our first encounter with lemurs in the wild! 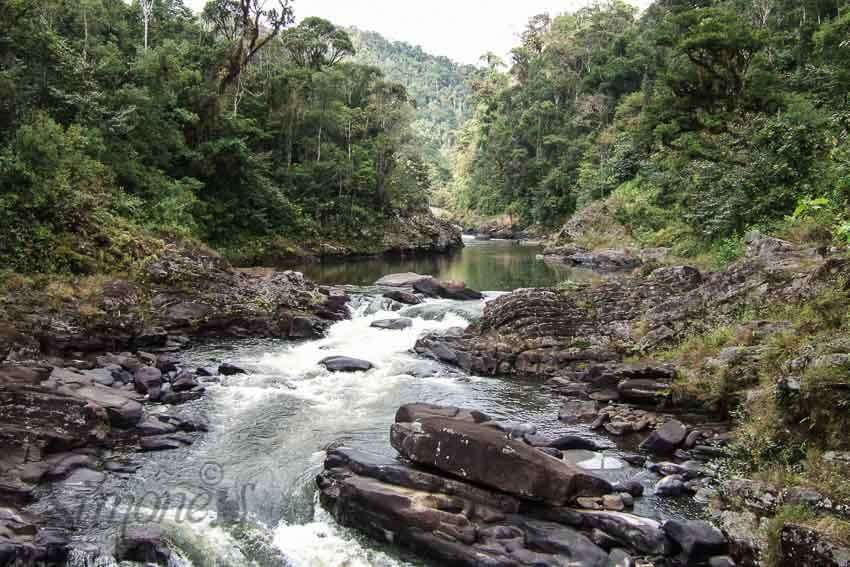 The area around Ranomafana has been a national parc since 1991, shortly after the gold maki was spotted. The parc is a whopping 416 square km and is situated in a mountainous area, so expect lots of climbing. The trails are fairly well maintained but – as you would guess  – the lemurs don’t really look at the trails, so if you want to spot some you will have to climb around off the path. And because of the rain the night before it was slippery. Also good to be aware of leeches so make sure you wear long trousers and put your trousers in your socks (or wear special anti-leech socks) 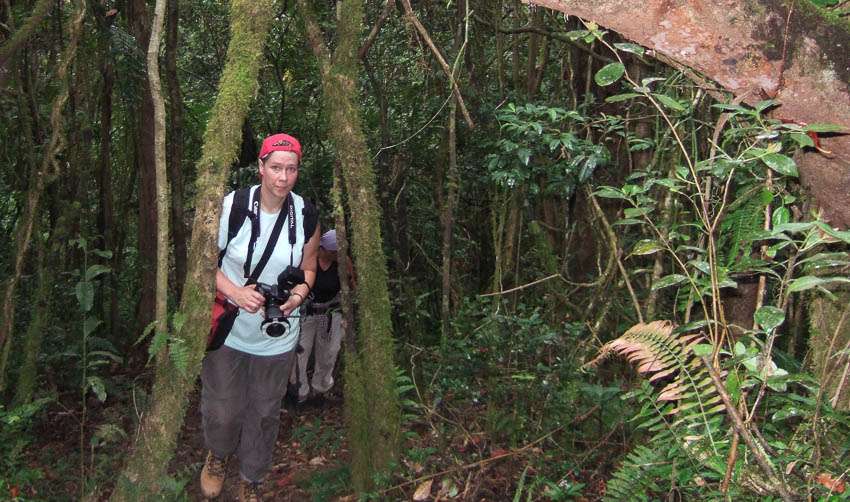 Looking sexy running around in the jungle

Hiring a guide and going around in a small group is always a good idea in parc like this. Getting lost is a real possibility and on top of that a guide will see way more than you will ever see. We were walking around with four people (we were traveling with friends) and our guide. We spotted no less than 6 lemurs: red belly lemur (photo below), the small bamboo lemur, the big bamboo lemur, gold bamboo lemur, red fronted lemur, sifaka and – also very special – a leaf tailed gecko. 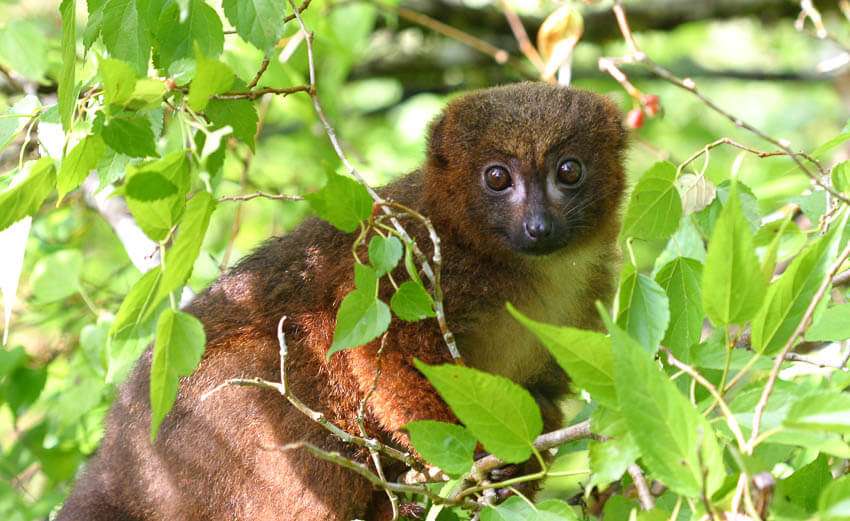 The gecko is maybe not spectaculair but the fact that we spotted it in the first place is a miracle. Look at it’s camouflage! (photo below) 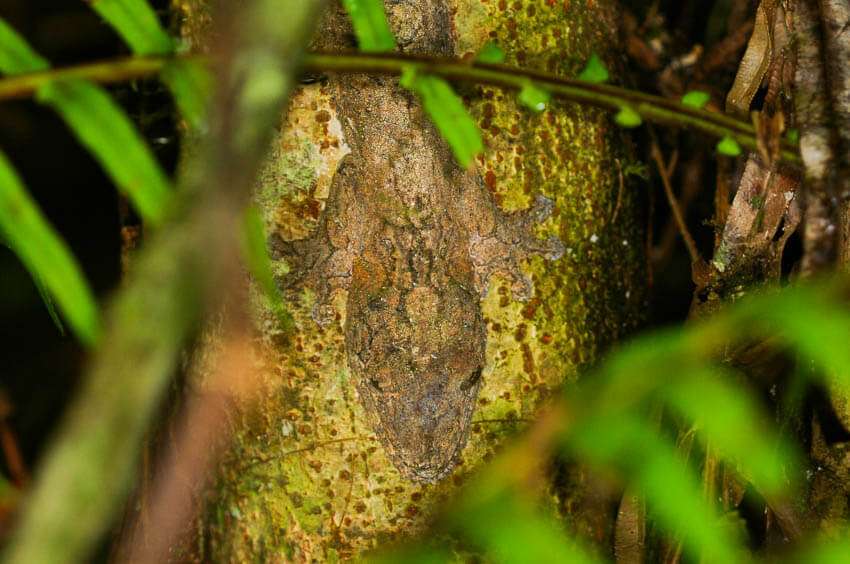 No wonder if we would have missed that right? The gecko relies heavily on it’s camouflage which means it will stay still if you approach it. In comparison to other gecko’s that makes it easier to snap a picture. Most other gecko’s will just disappear faster than the light when you try to do the same thing.

All in all Ranomafana is highly recommended when you go to Madagascar. I don’t know what the situation is at the scene right now. Visitor numbers vary wildly through the years, depending on the political situation. I heard from someone who has been there recently that things haven’t changed all that much.

After our hike through the parc we were back around lunchtime in the only restaurant you will find in the parc itself and best to skip that one. We were rather patient (you have to be in Madagascar anyway) but when the food finally arrived after 1,5 hour it was inedible. Tom had ordered a chicken but it must have been more than a 100 years old. He could literally not eat it. Haha… Anyway, skip the restaurant and visit one in Ranomafana or have it in the hotel. Much better choice! 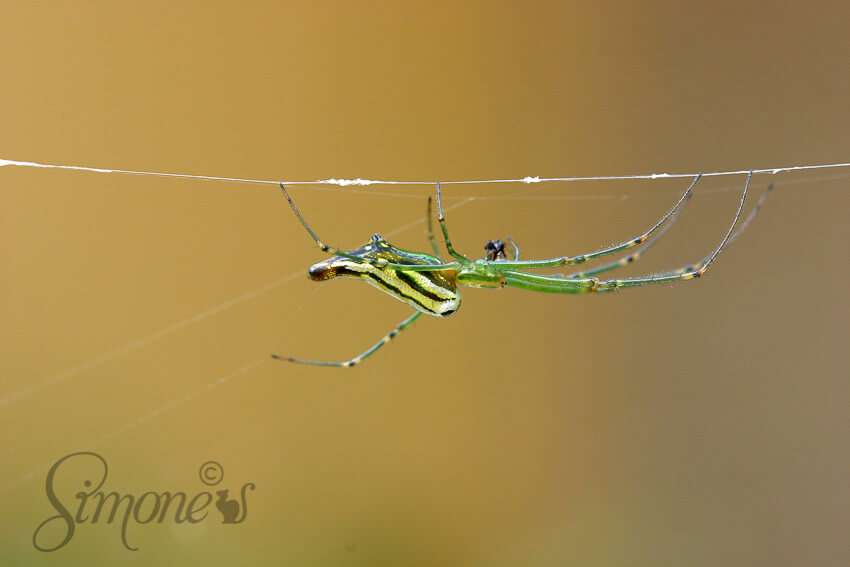 A walk around the garden delivered some pretty pictures and maybe not so pretty but we had a visitor in the restaurant in the evening. Quite a large one too…! 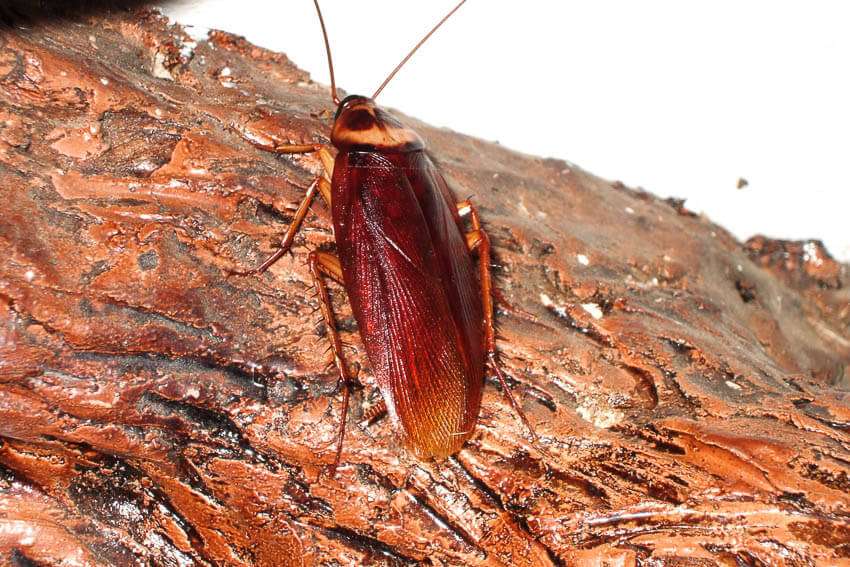 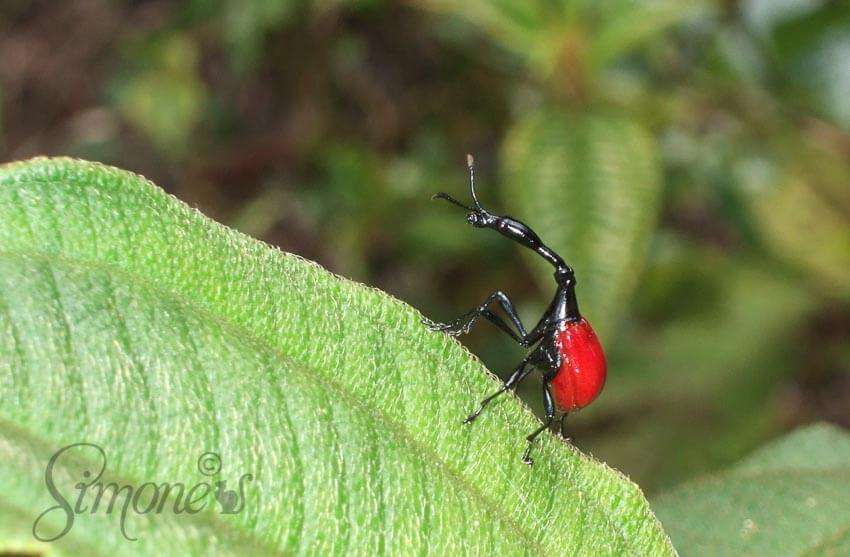 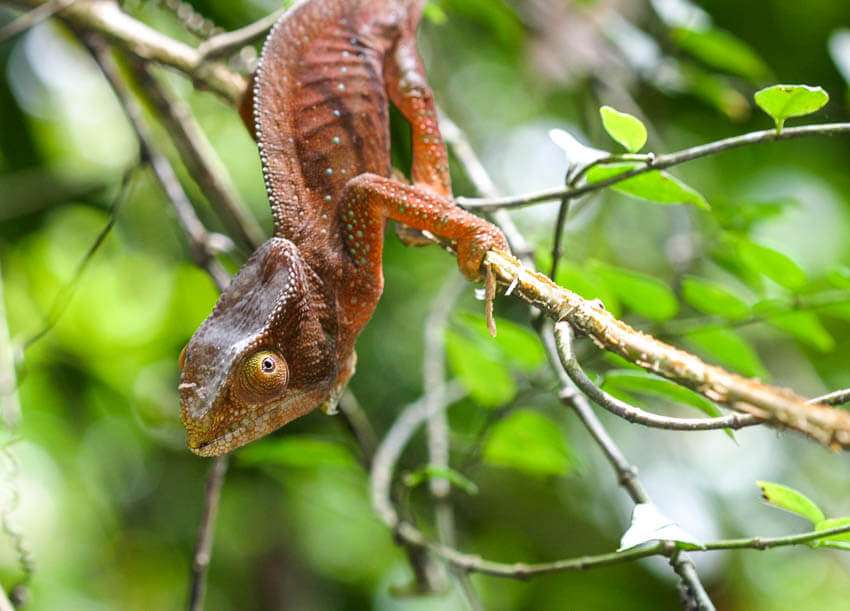