Recipes » Healthy » Halloumi tomato and a little bit of patience

Halloumi tomato and a little bit of patience Yesterday it was finally time; after weeks of waiting and thinking and looking at other websites for inspiration I finally received the mockups for the new webdesign… And it’s gonna be prrrrettttty!!! I can’t wait for all the coding and whatever else needs to happen behind the scenes to be ready and I can show you the new site. Because the way it is now, is never been entirely 100% to my liking. Nothing bad to say about Inge from Windward Handmade who did this design, as she had to do with the tools I gave her (and those weren’t the best) You see I had decided that to cut cost I would ask her t0 tweak my existing template. That’s what I asked her to do and that is what she did. Nothing wrong with that, but it was never entirely exactly what I wanted…

And so it kept itching a bit. Colors not exactly right, layout not exactly right. It was all just not entirely it. And I was on the waiting list for Purr Design since a year. Lindsay from Purr had designed a site for me before and I knew she was good and I also know she was a star in translating my wishes into something I really want. But being that good, usually also means you’re very busy. And so when I wanted to redesign Simone’s kitchen a year ago there was a big waiting list. I went on the waiting list and than forgot all about it and moved on. In January however I received a mail from Lindsay asking if I was still interested and that a spot had opened up. I was definitely still interested but Tom was still unemployed and it didn’t look too good, so spending extra money on websites didn’t seem like a good idea. I told Lindsay as much and she reacted very understanding saying that if anything would change I could always knock on the door and they would fit me in. Regular customer and all.. And a few weeks later Tom got a job! So… you can guess where this is going right? Send an email to Lindsay again and so started the process of finding examples, thinking about colors and fonts, explaining what I wanted and what I did not want and so on. I love site x because of y and I love site y because of x…. it’s good I am not a designer as I’m pretty sure I woudn’t have been able to make any sense out of my own wishes! But I think Lindsay has outdone herself this time. I could – ofcourse – show you the mockups, but I am not gonna do that. I am gonna build the suspense.. 😉

The planning for go live is at the end of April, so still a bit of work to do behind the scenes! Because not only the design will be changed, I have also finally come to my senses and I have only one blog left. yes, it is true… Hand on my heart and things like that! So… there is content to move from one to the other and/or translated. O well, it keeps me busy so to speak. And in the process I ran into this recipe and figured it would be a perfect little spring dish. The tomatoes are not yet at their peak but I’m sure you can find tasty ones somewhere as that is a must. The crunchiness of the radish and the saltiness of the halloumi make this a winner! 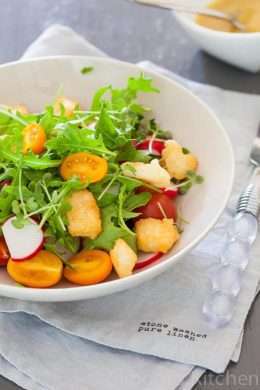 2 comments on “Halloumi tomato and a little bit of patience”