Gamba with salmon and beurre blanc and new cooking club

I am sure you remember we were briefly part of a cooking club that came out of one of the cooking courses we followed a year ago. No offense to the people in that group but it was never really entirely our thing. When I go cooking I want to cook and what I don’t want is for most of the food to be prepared already before we start. Plus it was never entirely our kind of people. So when Mathijs approached us end of last year with the news that he was starting a location where cooking clubs could cook, we started thinking about making our own group.

Obviously choosing who to invite and who not is not as easy as it sounds; they don’t have to be superchefs but they sure need to LIKE cooking as that is the first reason you would enter a cooking club, right? So that was our first criteria; who do we know in our circle of friends that likes to cook? And do they – in turn – maybe have friends that also like to cook?

Before we knew it we had a list of people that might like to join and it wasn’t even that long after that, that we had to say no, as the list was already growing too long. The final list consists of friends, friends of our friends, family and people we met through previous cooking courses. 🙂 A nice mix!

The official opening of the new cooking studio was in January when we were in Costa Rica, so we had no chance to see the place before our first session.

But then again we’ve know Mathijs for a while now and we had all the faith in the world that it would be ok… And well, let me tell you it was!! We all arrived rather early (eager to start!!) yesterday around 6 pm and after having a glass of wine to get into things, Mathijs explained a bit about the houserules and how we were gonna be cooking and then it was time to start. We had four courses and 12 people so we divided into 3 people per course. I was doing the entree together with Charlotte and Mike, who – if you’ve paid attention – both have featured on this blog before… 🙂 O and if you’re a Dutch blog reader you might know Femke too as she is the author of the blog called Excellent Eten (and also happens to be Tom’s niece)

So what did we make? Our menu of the evening was this:

Gamba with salmon and beurre blanc

Duck with prosciutto and spring onion served with marsala sauce, pommes duchesse and tagliatelle of black salsify (schorseneren in Dutch)

Jelly of orange with melting chocolate cake and vanilla sauce

Hungry yet? I will just give you the recipe that I made myself together with my two other chefs otherwise this will be an even lengthier post.. 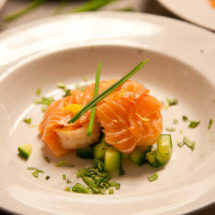