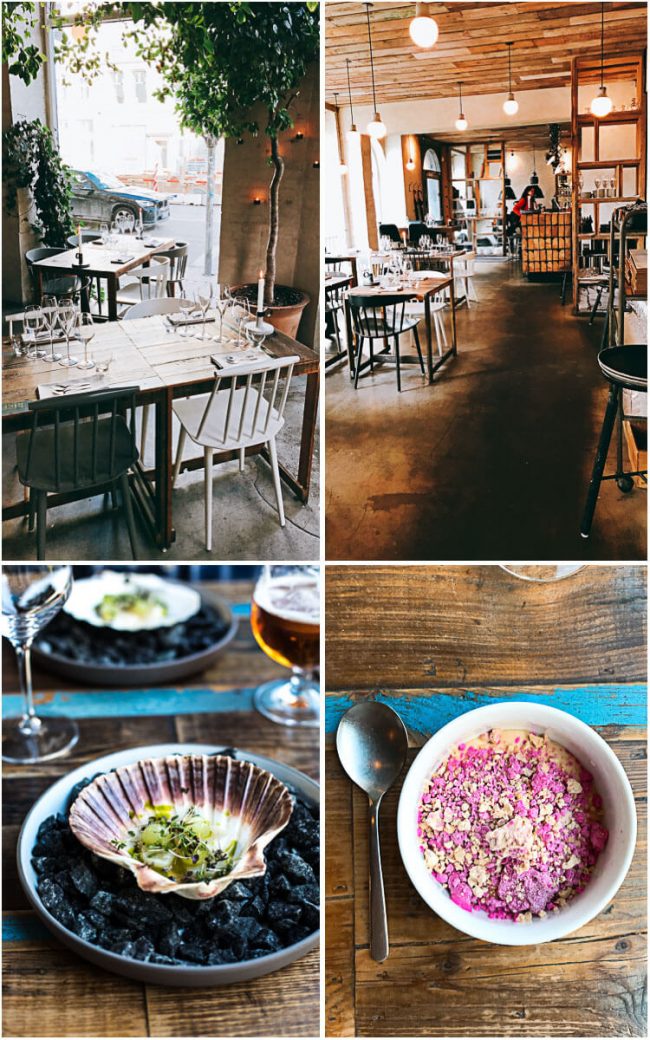 The best restaurants in Copenhagen

I should really start now with a bit of a disclaimer as I obviously did not visit all the restaurants in Copenhagen, let alone that we had a meal on all of them. That is one of the downsides of ‘only’ staying in Copenhagen for five days. There are so many restaurants, it is virtually impossible to visit them all. Well at least not in one trip.

If you are planning a trip to Copenhagen then be sure to make a reservation at Höst. It’s a popular place so without reservation you run the risk of not being able to get a table. We had made the reservation weeks in advance, based on a recommendation someone gave us. The website looked cool and while not the best of arguments, Höst did not disappoint at all! It’s a fabulous spot (first four pics are made in Host) and I love the design but the food is even better. We chose the three course meal but you end up with many more dishes as you get a lot of extras. I found the price more than reasonable especially considering the quality and what you got for your money. We ended up with 6 courses and each one of them was totally delicious. 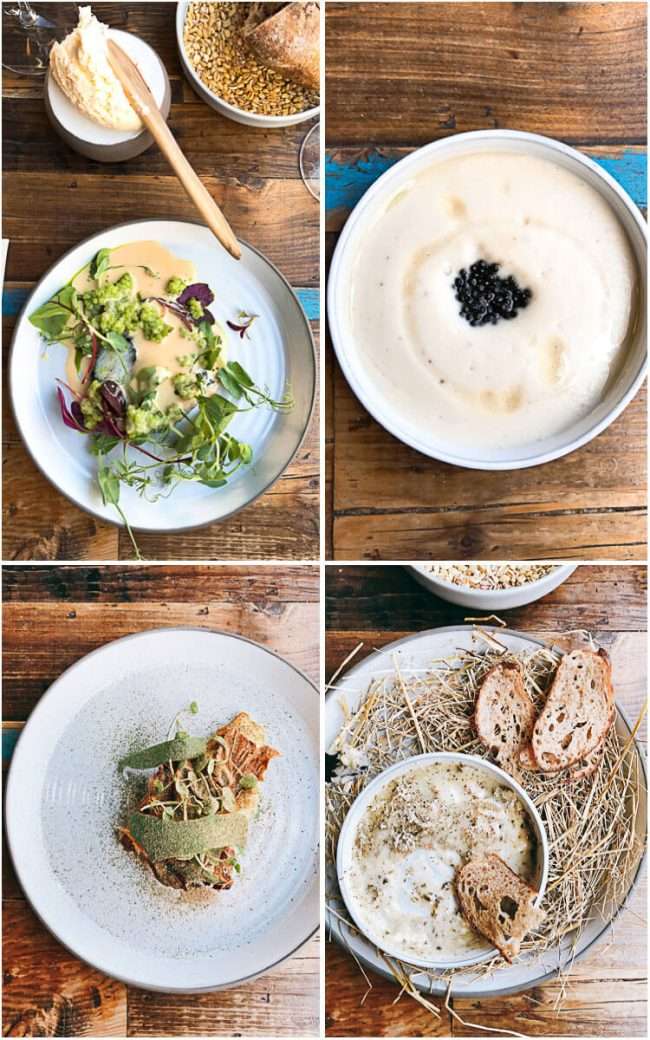 At one point I was asked if I wanted an extra dish right before dessert: baked camembert… Hello… What do you think?? (it’s the picture bottom right. I already ate most of it before I realised I hadn’t taken a photo yet) We arrived early so I could shoot some pics before the crowds arrived but by the time we left it was packed. So don’t forget that reservation!

We also went to Väkst, the brother or sister of Höst and found that disappointing. It could just be bad luck or picking the wrong dish so I would definitely give them a second chance but not so impressed.

You might know the foodhalls in Amsterdam or have something similar where you live. Torvehallerne can be best compared with those halls. It’s fairly big but not too big and it houses several smaller producers. Perfect for snacking your way around lunch. Eating a bit here and eating a bit there. 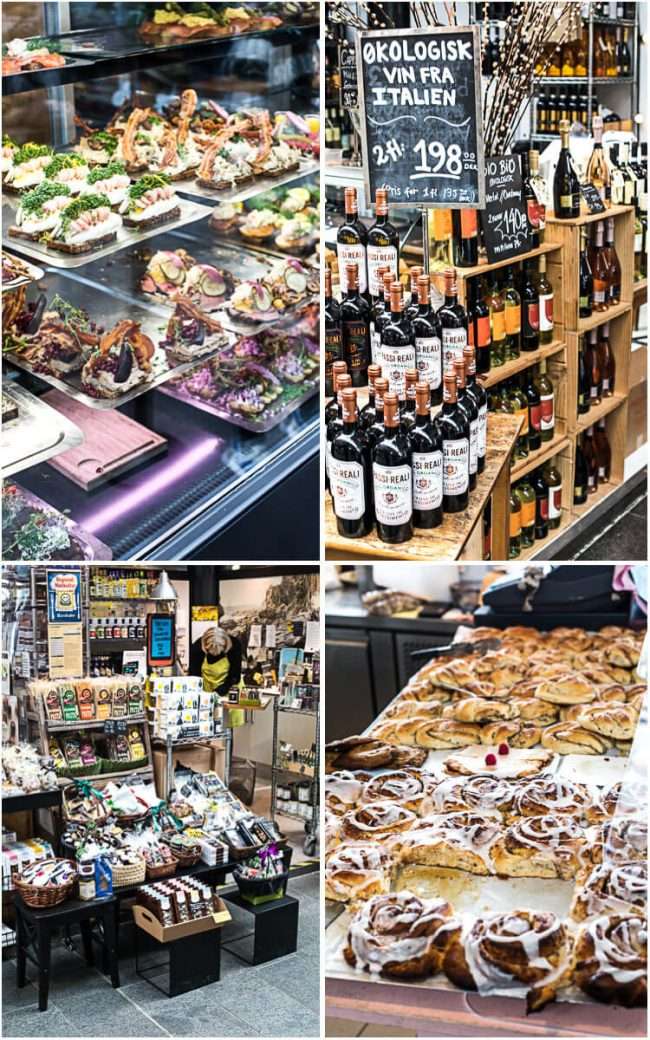 We loved it for lunch. Especially since we got to choose different dishes each. I went for a vegan burger and Tom went for a Vietnamese sandwich. Obviously with meat. And that is easy to do here.

We were in Copenhagen in March of this year and we had quite a bit of bad weather so we stayed longer in Torvehallerne just because it had a roof and was nice and dry.. 🙂 Plenty of choice!

The second restaurant we had dinner at night was Brör. Again here it makes sense to make a reservation and be sure to let them know if you have an allery of want to eat vegetarian or vegan. They are pretty flexible and I chose the vegetarian menu. My dishes were completely different from Tom’s. Sometimes when you choose vegetarian you just get a version of the meat dish but just without the meat. In this case the dishes were totally different. And all of them were equally delicious. The only dish Tom did not like was the creme brulee with bone marrow in it… Yuck… Everything else was delicious! 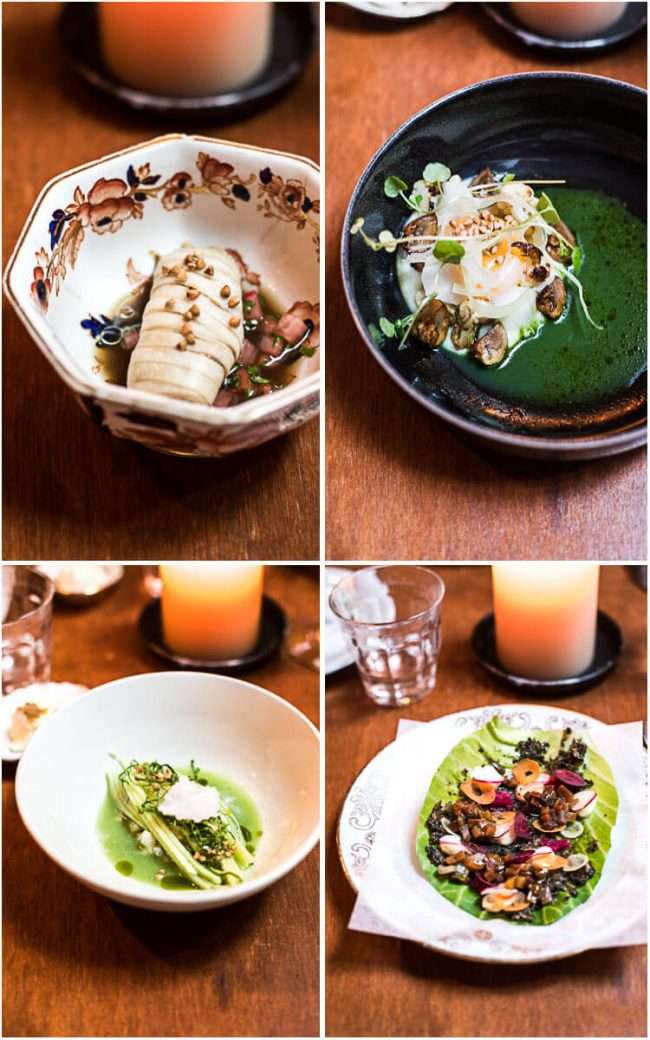 We stayed in the  Andersen boutique hotel, at the edge of the centre and our reception was great. The tip to visit Papirøen came from them. Good tip too. We had rented bikes at the hotel and if it is not pouring rain, Copenhagen is perfect for cycling around. The cycling paths are fabulous and maybe even better than the ones in the Netherlands. And that is saying something. Anyway we cycled to Papirøen and on the way passed the former restaurant of Noma. It would have been nice if it was still there but sadly we missed that. Wouldn’t have been able to afford dinner there anyway but still…. 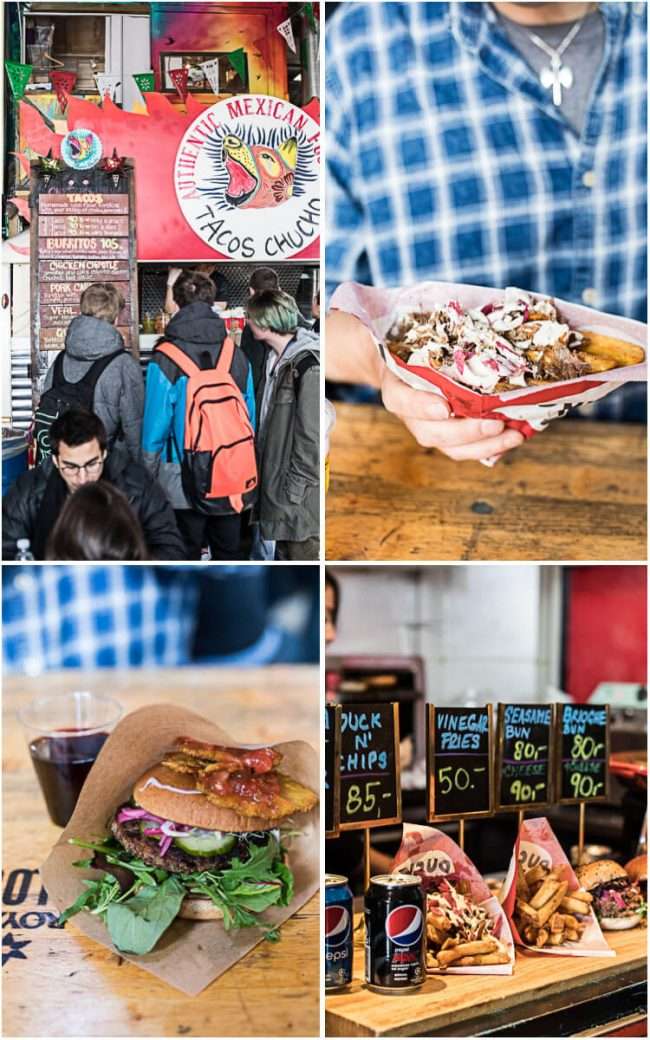 Papirøen is best compared to a streetfood market but is indoors for the most part. If the weather is good there is plenty of room to sit outside as well where they transformed the area into a sitting area with containers and other junk. Looks fantastic and is by the water front. Inside you can pick whatever delicacy you fancy. Tom chose the pulled duck burger and I went for a delicious vegan burger. I did hear someone say that Papirøen will be taken down soon to make room for appartment building. Apparently the spot they occupy is very popular so money won over the streetfood. So don’t wait too long with visiting this one. It’s worth it!

Last but not least we had dinner in the Meatpacking district

I think the name just means fishbar, because that is what it is: a fish restaurant.Volgens mij betekent het gewoon visbar, want dat is wat het is: een visrestaurant. 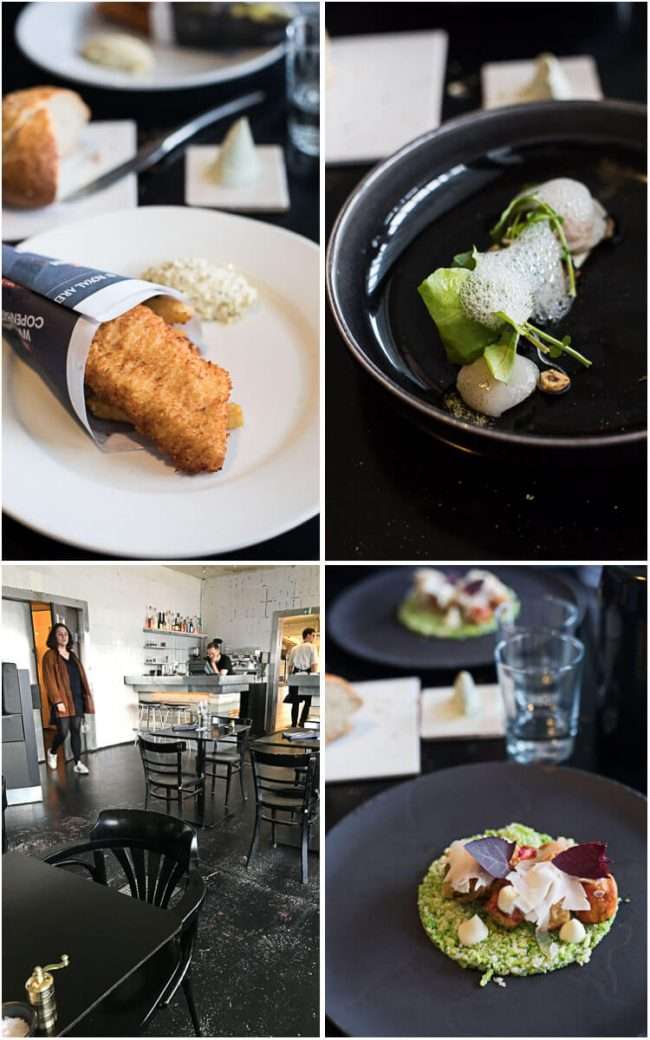 Again everything was totally delicious. If you go make sure to pick the Fish & Chips (top left in the pictures) as that was to die for. You order smaller dishes or you can pick one main. We opted for the smaller ones as I love tasting more than just one dish. But of course you can choose either if you want.

Have you been to Copenhagen? And if so what were your favorites? We will definitely be going back soon! « Previous PostBeetroot pancakes (glutenfree, paleo)
Next Post » Noodles with Swiss chard and the birth of a recipe