It will come as no surprise that this Dude is a big fan of Masterchef Australia in general and a very big fan of Matt Preston in particular. Of course this cooking contest  hosts a lot of macho dudes like Matt Moran, Marco Pierre White en even Gary and George are king of the kitchen in cooking terms.  And even Adriano Zumbo has something Dudey in a strange and sinister way when he smiles his evil laugh just before presenting a ‘mission impossible dessert’ by which all contestants abandon all hope. But literally the biggest dude is Mister Preston.

I still recall the very first time I saw an episode of Masterchef (the first season) and got introduced with Preston. I just couldn’t stop thinking about a character straight from the Harry Potter movies, when I saw the giant all dressed in a green suit and pink choker. My, oh my, this man had a major attitude. But it turned out that my first impression wasn’t right at all.
Just two episodes later I learned that beneath his flamboyant exterior he was hiding an insanely intelligent person.
Preston really knows all the flavors of the world and his refined taste is literally world famous. Especially when one of the participants presents a dish and start to tell a bullshit story about it, to hide the fact that the messed up, he immediately comes with a story that describes the first moment he tasted that dish and a description of how it should taste. Have you ever tried to describe the taste of a dish? Than you know how hard it is, but Matt can do it like no other. When he tells you how a dish should taste, every single word makes you salivate. And gives you almost a precise idea of what he is eating or what he would have liked to eat.  It seems to me that when Matt tastes a dish he always takes a trip down memory lane. And bringing you along on that trip is an art all in itself.

So no wonder that I thought the Preston masterclasses, that started in season three, where the best thing ever. A major source of inspiration for creating simple cheats for simpifying recipes and of course for dudefood in general.

Everyone knows his famous cola chicken in the oven. And watch him microwave a cake in just a few minutes. And the list goes on. He is now already on his third cookbook and I love all of them (even though I still have to get my hands on the third one).

But enough about my fascination with mr Preston or you might think I am about to start a new religious cult of Matt Prestonians.

As promised to you earlier I will give tribute to Matt Preston with one of his recipes.
You might remember we did one before with his historical  chicken in cola recipe. But because you can never have too many recipes for totally delicious potato salad, that is what we’re serving today. 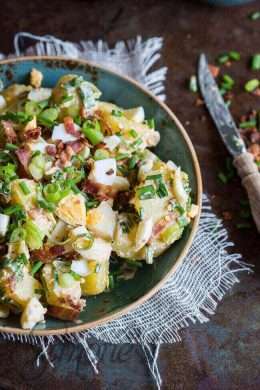 Easy to make potatosalad with a fresh dressing

An easy to make potato salad whith a fresh dressing of yoghurt and mayonaise. Perfect for a side dish or a salad with a barbecue.
Prep Time: 10 mins
Cook Time: 15 mins
Total Time: 25 mins
Servings: 4 -6

To make the dressing: