Last week I had to skip my favorite part of the week, DudeFood Tuesday, because this dude was ill.
And everybody knows: when dudes are ill, they are really very, very, very sick!
The Misses said that my illness wasn’t that much, ‘Just some flu and a small laryngitis. Nothing special.’
Nothing special? Nothing special???! The thing I was coping with was a severe flu and a laryn ‘whatever’ with a capital ‘L’ ! The misses still doesn’t know why sickness works different with men  and women. Let me explain it one more time:When women are ill that’s inconvenient. True. They do have some flu and have to cough every now and then. Just take some aspirin and presto.
But when men have the flu, that’s something else entirely. It is genetically determined that when a man has the flu, he is really very ill. They are in dire need of comforting and they are even dying when they have the flu. When they have that laryn thingie in the throat they can’t talk anymore and even swallowing is a feat of strength. On top of that they sometimes even have fever! Needless to say that men are much more sick than women when they have  the flu.

And what do you eat when you are that deadly ill? Soup of course. So here I give you my recipe for the soup that saved my life last week during that severe and traumatizing period of illness. It’s a tomatosoup with a devious twist. 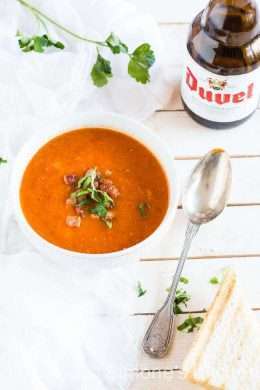