Recipe by ingredient » Chicken » Dudefood Tuesday: Chickensatay and making your own peanut sauce As promised last week, I am still under the influence of all the delicious dishes I have tasted while we were in Indonesia. Also that typical flavor of a good Indonesian chicken satay inspired me. The smoky flavor of the charcoal, with that typical mix of spices that is so hrs to copy. And of course the delicious peanut sauces. Not those greasy, dark poop colored thinned out peanut butter sauce you can buy here in jars or even buckets full. By the way; sauce in a bucket? Are we painting the attic or do we want a subtle sauce with our food? Ok, ok, I tend to exaggerate a little, because subtle is of course not really a main ingredient in the dude food kitchen and even I sometimes use a good dose of sauce from a jar next to a piece of meat on the barbecue. But, when you taste those Indonesian satay, even the biggest dude will understand that you cannot serve this with a sauce that can be poured. That is like going to the toilet and finding a warm seat. A cold toilet seat sucks, but a warm one is scary and just plain wrong. So with high hopes I got cooking this weekend hoping to recreate a really good chicken staat sigh a peanut butter-less sauce. I had been looking at the masters at work when we were in Indonesia for the ultimate marinade and browsed a bit on the Internet for additional information.
My enthusiasm got a bit tempered (literally) when I found out that autumn has definitely settled here. In other words: too cold to roast outside and roasting inside is guaranteed to bring the buckets into the house. Not the buckets with the wrong sauces, but with paint to redo the ceiling. So I needed to find another way to roast the satay indoors, without incorporating a spicy smell into the paper walls. That was a challenge. To make matters worse my peanut sauce (the second hero of this dish) became a total failure. The sauce stayed thin but unfortunately so did the flavor. The next time I would grind the peanuts finer add more ketjap than water. So that is becomes a ketjap kind of peanut sauce. And to finalize this failed experiment I will give you the failed recipe. You do know that it needs to be different right? The chicken satay itself was good, so the marinade as well as the cooking method are quite dude worthy.
And I have kindly asked the misses to create an alternative recipe for peanut sauce, that makes sure this dish will still make your friends impressed.
The recipe in the green field below is the good recipe. You want to know what the failed one was? You can find it below. 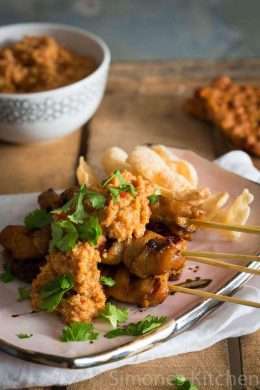 Did you make this recipe?Mention @simoneskitchen or tag #simoneskitchen!
The failed version?
For the peanut sauce:
250 gr unsalted peanuts
1 onion, finely diced
1 clove of garlic
1 tsp sambas oelek
1 tsp Palm sugar
1 tsp Lime juice
3 tbsp Ketjap manis
Salt
Best to make the peanut sauce 15 minutes before serving. Chop the peanuts roughly (or very short n the blender) Mix garlic, onion, palm sugar and samba, together to a paste. Fry this off shortly in a saucepan with hot oil and add the peanuts and ketjap to it. Finish with a bit of water. The sauce doesn’t have to be thick, it’s ok for it to be thin. If you find its too thick, just add a bit of water. Shortly before serving add the lime juice and stir through.

5 comments on “Dudefood Tuesday: Chickensatay and making your own peanut sauce”