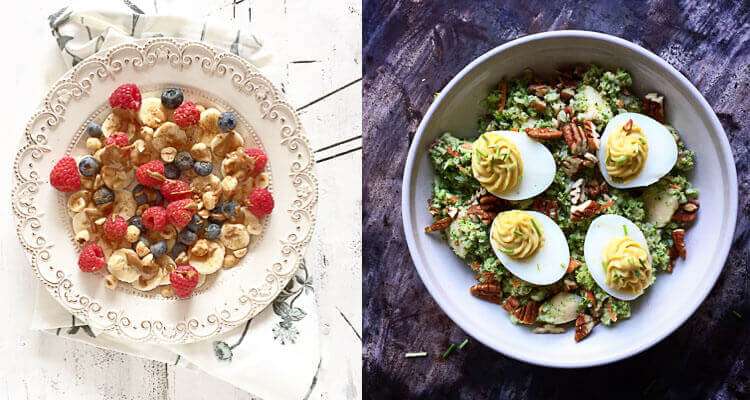 Day 8 already… Time flies. Only 22 left to go… O that sounds quite long actually. Haha.. Anyway, I had a trainingsession this morning with my PT so couldn’t eat a full breakfast and ended up eating one boiled egg and one banana. That turned out to be insufficient when you do a training session as I got a bit dizzy when I lied down for bench press. Felt a bit wobbly throughout really but that is not a big surprise in the second week.

Other than that the training went well. I think – I know! – I will have muscle pains tomorrow. Ouch… Came home and went grocery shopping as we have friends coming over for a barbecue tomorrow. Lunch was a delicious steak salad with a lime-coriander dressing. They also finally picked up the hospitalbed that was still in our living room, so yay! We have our house back! That also meant some reorganizing and cleaning was in order so did that and to end the afternoon I had a physio appointment. Dinner was dudefood! (Wasabi deviled eggs and we ate that with broccolisalad with pecans. Delicious!)

Breakfast was quite good with fried egg with salmon and roasted tomatoes. I can think of worse ways to start the day. My muscles were sore (!!!) from yesterday’s training which – of course – got worse as the day progressed. I felt fine otherwise and it turned out the the bout of dizziness yesterday was caused by hormones.. You know: the monthly kind. Lunch we finished the rest of the smoked salmon with mixed salad greens and a dressing of peach vinegar (there are pros to having a husband who deals in oil and vinegar without added sugars!) which was really good. 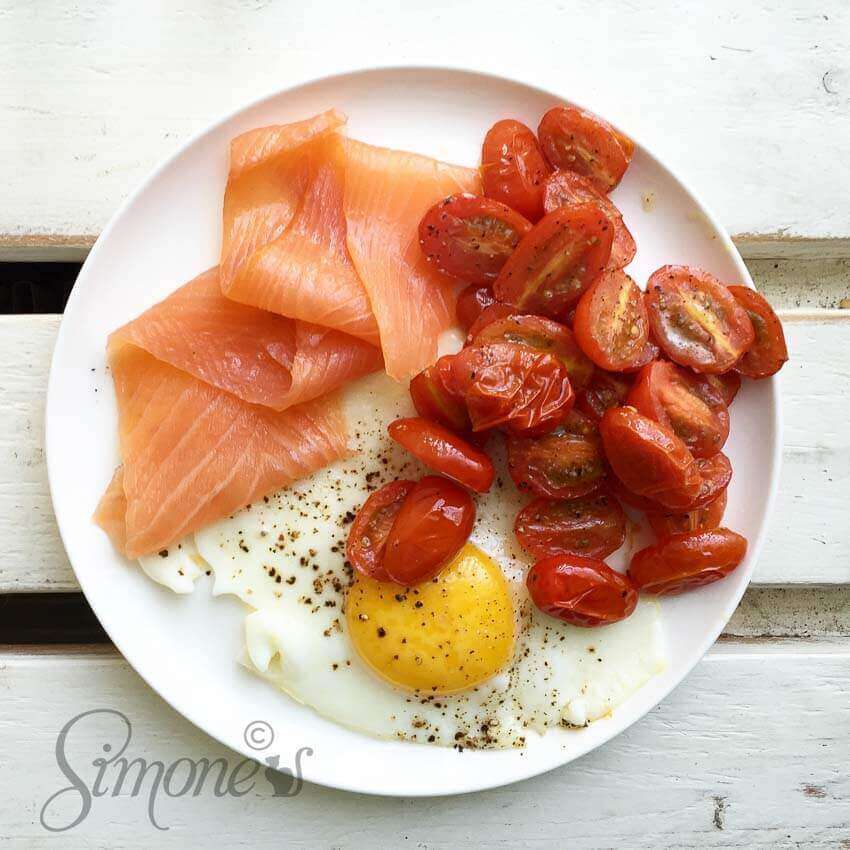 Dinner was tricky as we had friends over for dinner and we had planned a barbecue. Now technically a barbecue is easy on a whole30 as you can always make a salad and eat the meat as long as it doesn’t have a sugary marinade. But our friends are – obviously – not doing a whole30 so we also got bread, wine and we made dessert. But I stayed strong and kept within the program. I made a big salad to go with the meal and had a few pieces of meat. And just drank water with some lime in it. It actually went quite easy. Maybe the worst part was the smell of the pie that Tom made for dessert… 🙂 That just smelled fabulous. But otherwise I felt strong and wasn’t tempted at any time. So yay! O I think I did eat a sausage that was quite possibly not entirely approved but I think a small thing so I am not gonna worry about that.

Day 10 already! One third done! Whoot! I promised I would be starting to do different things for breakfast so yesterday I made my own ground chicken (from chicken thigh fillets) and seasoned them and made them into 16 small burgers. Baked them and froze them in batches of two. Those should do well as breakfast burgers and they are delicious! This morning we had the first one with leftover “greekish” salad from yesterday (tomato, cucumber and olives with a drizzle of Greek olive oil) It was good but I think it needs some work as the salad and burger were not the best early morning combo. But he, it’s an eggless start so we’ll see where we go from here. For lunch we had the shrimps that we had left over from the Barbie and I added a zucchini noodle dish to that. Ok. Dinner was cauliflower couscous with chicken (also from the barbecue leftovers) 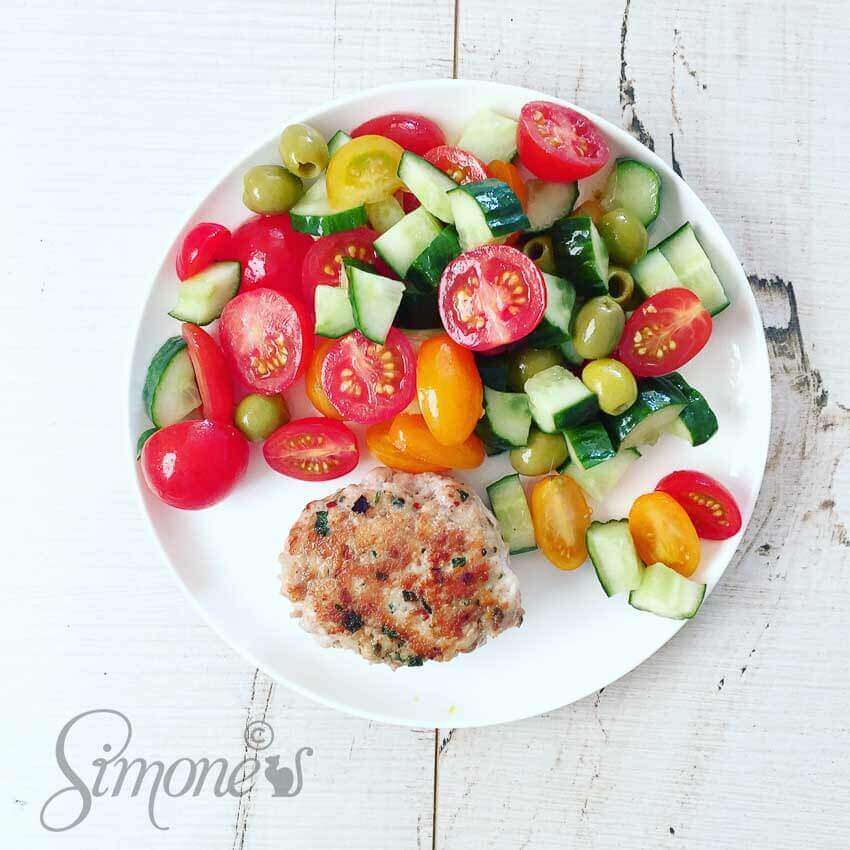 I felt ok but in the afternoon got really sluggish and tired. Felt like taking a nap.

Had my second training this morning so was determined to eat better and had leftover cauliflower with chicken and a banana. Hum, talk about slightly weird breakfast..:) But it tasted ok and it got me through the workout alright. I was a little afraid my muscles would be too sore still but it went remarkably well actually. Ended with 20 minutes of cardio. 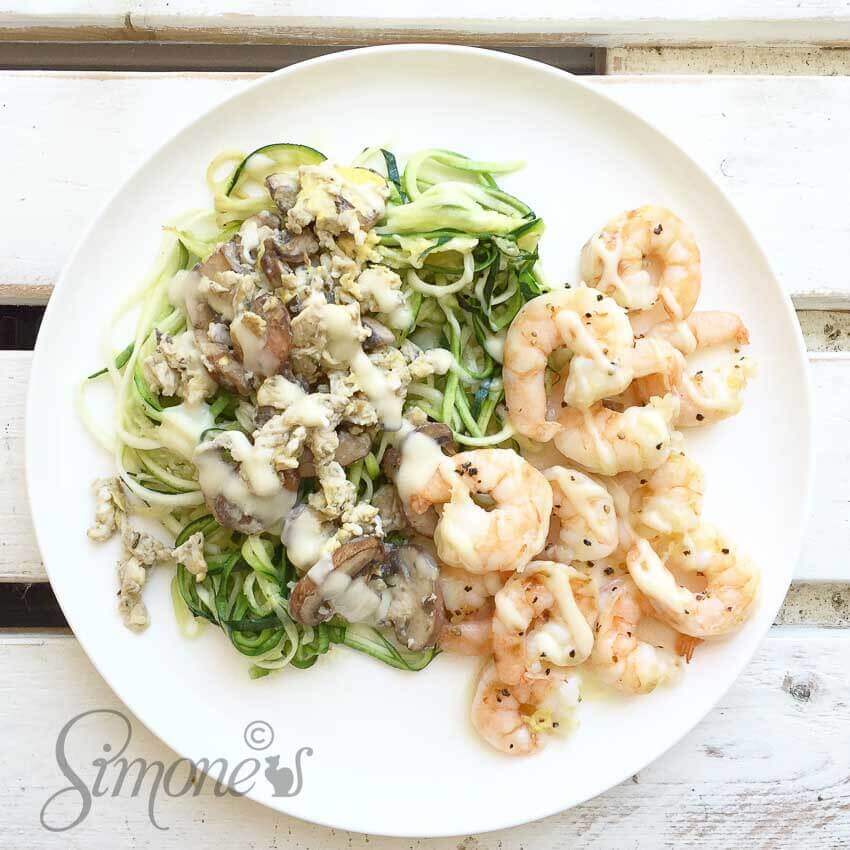 After getting home and taking a shower I had the real breakfast with another burger, scrambled eggs and strawberries. Lunch was tuna salad with arugula and dinner roasted sweet potato and entrecôte. I felt better than yesterday and it’s funny how I did not have the usual afternoon dip. Which is goooood. Still reading up on all things paleo and figuring out where to go from here. I really do think I might follow a moderate paleo diet going forward. Not sure yet how that’s gonna look but we’ll see!

Market day so early again. I have trouble coming up with a quick alternative in the morning so it was scrambled eggs again with courgette and sweet peppers. Not exciting but filling. For Tom I had made a chicken salad the day before and I had a cooking day with Esmee so we made a couple of salads and a breakfast quiche which was delicious! Found sugarfree bacon as well. Whoohoo! Dinner was the same salads I had for lunch but with a sausage. Quite filling. And since it was Friday night we had a little snack with cashew nuts. Just a tiny bowl. Technically not entirely on plan but it was tasty.

Had a – relatively – lazy day today. Did get up early for the usual reason and had breakfast with that breakfast quiche we made yesterday. Sadly it tasted much better when it got out of the oven yesterday than cold. Still ok-ish but not as good as I had hoped. O well, it is something else anyway so that’s ok. I made the mistake of going on the scale. Which is not allowed during the whole30 and for a good reason as weight is just a number. I can see my waist getting smaller, belly fat is reducing but that number on the scale was disappointing… One more reason to stay of it for the next two weeks at least. Or maybe toss the thing altogether. The gym is doing a monthly fitness test including weight so that should be enough right? 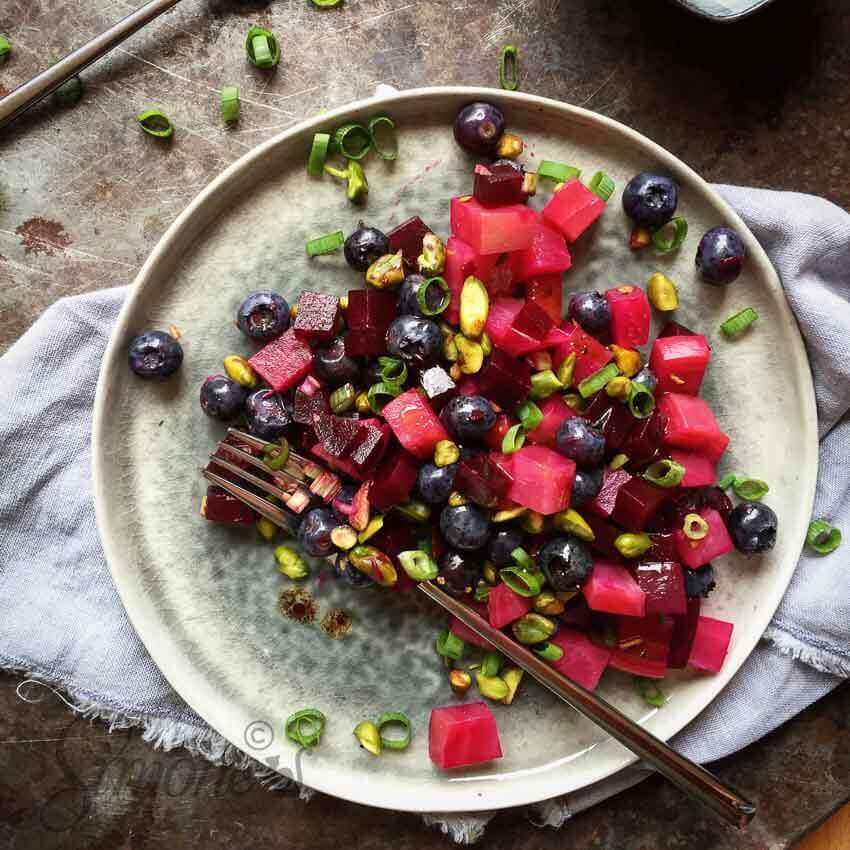 Anyway, brushed it off and moved on. Lunch was delicious! I had two beets leftover from yesterday as well and combined those with blue berries and pistachio. Dressing of pistachio oil with balsamic. I’ll share the recipe later.

Dinner was chicken breast with broccoli, bell pepper and mushrooms stir fry with cashew nuts. We watched the last season of Luther (ridiculously only four episodes!) and snacked on a tiny bowl of raw cashews. I might have had too much nuts today so will decrease nuts tomorrow!

One more day to go before we are at the middle point of the whole30. Yay!

The weather was absolutely horrible today so stayed indoors. Worked on the blog and stuff like that. Breakfast was another one of those quiche parts. Lunch was carrot salad with coconut and dinner roasted potatoes with salad and a hamburger. And messed up with the nut-eating again too. Got to get that back under control as they are good but also containing loads of fat. Not what we need right now so nut-eating under control!