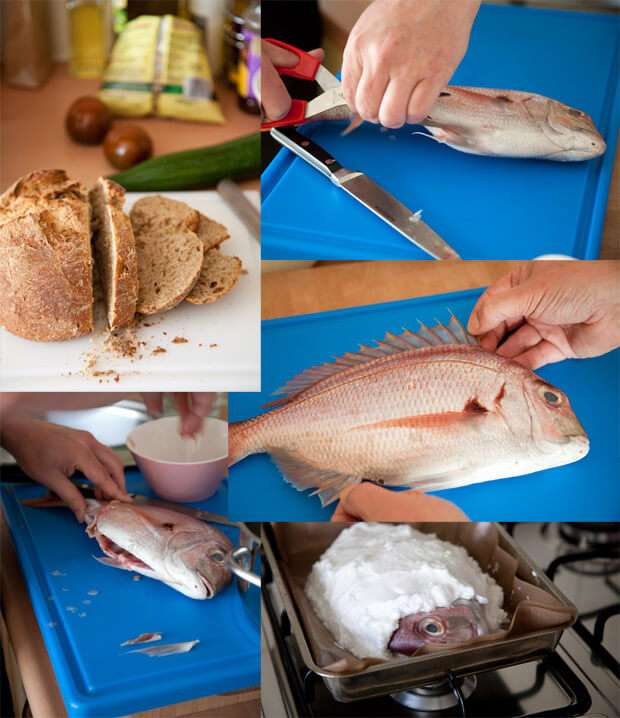 Well… ahum… where to start? We were all prepared for our cooking adventure last evening and had our professional looking apron on and the oven was burning to put the fish in later. Ofcourse we had to clean the fish first and while I was preparing the panzanella salad (that is what the bread above was used for) with bread that was too fresh, Tom got to do the part where the intestines of the fish had to be removed.

Not that I mind doing that, but if I have someone else to do it… I certainly don’t mind that! 🙂

It started with the fact that we couldn’t find the right scissors to remove the vins which were really hard (we found the scissors after we were done, though… typical!) but ok we managed with regular scissors. Tom cleaned the fish professionally, rinsed the insides under a running tap and whisked the eggwhites. During our cooking course, Rob showed us that preparing a fish under a salt crust is rather simple if you use eggwhites. The eggwhite is easier to remove after the fish is baked, then a crust existing of only salt. So you beat the eggwhites and ones stiff add copious amounts of rocksalt to it, so you get the same effect but with a crust that is easier to remove. So far so good; we only have one roasting tray and it was a little bit tight but just ok for the dorad. We had filled the cavity of the fish with lemonthyme and oregano by the way before putting it in the tin and covering the whole with the prepared salty eggwhite. Looks good so far doesn’t it? 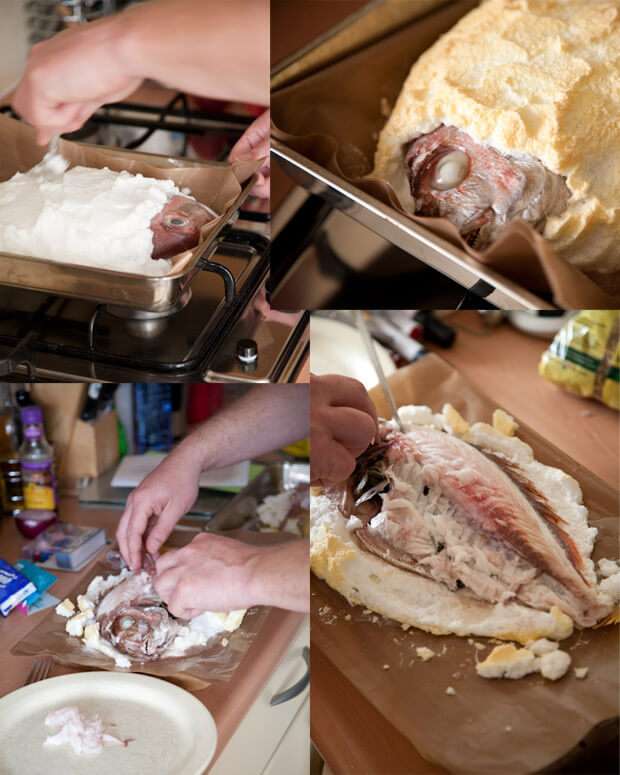 One of the things that Rob thought us during the course is to not work in ‘minutes’ but rather look at the food you’re preparing to asses wether or not it is cooked properly. That is easier said then done when you have your fish tucked inside a crust, so I had to asses it based on the outside of the crust which looked nicely brown. The part of the head of the fish that was exposed started to crack and revealed nicely done meat so after about 25 minutes I took the fish out of the oven. Ok, I have to also confess that I checked on the internet how long I should approximately have the fish in the oven. It said 20/25 minutes….

But breaking open the crust it became apparent very quickly that I should have left it longer. Removing the skins (with the scales still on) already showed that it wasn’t cooked. The skin normally is easily removed if the fish is cooked through, but in this case it still stuck a bit to the flesh and the flesh did not want to come off the herringbones either… Such a waste of a beautiful fish!! I probably should have left it at least another 5-10 minutes. We did try the meat and I also did not like the flavour of the herbal combination we put inside. It gave a rather bitter aftertaste. Needless to say that we did not eat the fish but were left with a salad that well, quite frankly, had soggy bread. 🙂 O god, I am sitting here behind my computer laughing out loud because it’s just so silly… It doesn’t happen (thankfully) very often that everything goes wrong, but last night wasn’t a really great example of our culinary skills. But we did learn quite a lot, so in that sense it was not a waste. We did eat the salad by the way and it was still quite tasty but you really have to make the salad with old bread and/or toast it properly. This particular recipe didn’t call for toasting it, but I will definitely do so for next time! 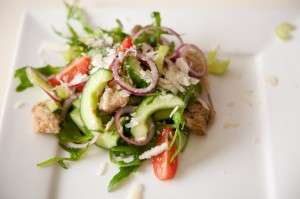 I used some of the kumatoes also in the salad as well as some lovely sweet milano tomatoes so that was really quite tasty.

So there you have it, our official Dorad Disaster Day! And OMG….it’s chicken time tonight!! Fingers crossed that it turns out better! On the menu for tonight is roasted chicken with roseval potatoes and fresh asparagus. But first… we will go outdoors and celebrate Queensday! If you have never been to Holland on April 30th, you might not know what I am talking about but Queensday is our official celebration of the Queens birthday and it is the day that the country goes slightly crazy. Everyting is orange everywhere you go, people dressed up in orange, cake with orange topping, orange drinks, orange everything. Music is in most cities, lifebands, radiostations that give life shows on stage and people that sell all their old crap on the streets. I might bring my camera along to take a few snaps, so you can see what I mean!