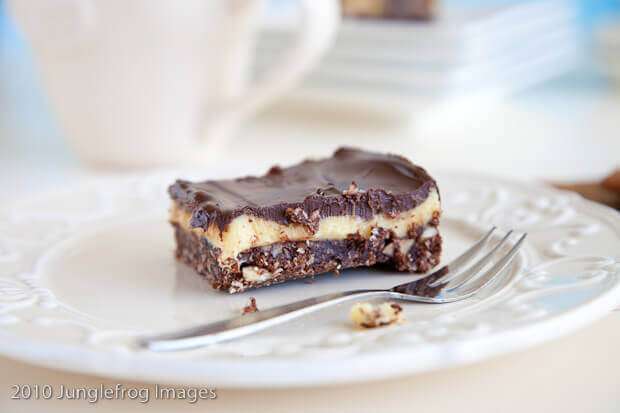 Ok, don’t you all dare to laugh at me… 🙂 Yes I forgot to make the challenge but I think I came back pretty quickly didn’t I? I was lucky that an appointment for today was cancelled so I all of a sudden had time to make these lovely bars.

I first started with making the Graham wafers, which were very simple to make really. I did not make them glutenfree. I wanted to but to find glutenfree flour here is simply impossible. At least not in any store nearby so I figured I might as well do the wheat version. I did use part riceflour since I still had that from when I went to Amsterdam and saw it. I had no idea what tapioca was, so didn’t bother finding that and just went with wheatflour.

I didn’t have vanilla essence either, so I substituted this with cinnamon essence and I actually think that was a brilliant choice as I loved the slight cinnamon flavour of the cookies. I kept eating little bits of the dough. It was so good!

I had never had Graham crackers before so I wouldn’t be able to tell you what they are supposed to be like but I quite liked mine. I think I did roll them out a little too thickly. I mean 1/8 inch doesn’t mean anything to me except that it is roughy 1/8 of roughly 2,5 cm… 🙂 I was a bit too lazy to actually calculate it so I just guessed a bit what would be the right thickness. And then again, I don’t know if mine were wrong or not as I have nothing to compair them with. They did bake longer then the 25 minutes that Lauren had given, but considering the fact that we have a terrible oven in need of replacement; that is probably the reason. O let me first get one thing out of the way:

The January 2010 Daring Bakers’ challenge was hosted by Lauren of Celiac Teen. Lauren chose Gluten-Free Graham Wafers and Nanaimo Bars as the challenge for the month. The sources she based her recipe on are 101 Cookbooks and www.nanaimo.ca.

Once they were baked I got on with making the middle layer which consists of looooots of sugar, butter, cream and custard. I thought it was very very sweet so to counterbalance that a bit I added about 2-3 tablespoons of lemon curd and that did the trick for me. The sourness got rid of a bit of the sweetness and I love the subtle lemon flavor. But then I am a true lemonlover so anything lemon is good in my mind. But I think it went well together with the rest.

I did think that the qty of the middle layer was not really enough compaired to the other layers. I think my form was about the right size but I felt I had to spread the yellow layer too thin resulting in just a very small layer in the middle. So I actually didn’t spread it through the entire tin but left about a quarter open. So I will have only the bottom on that part… 🙂 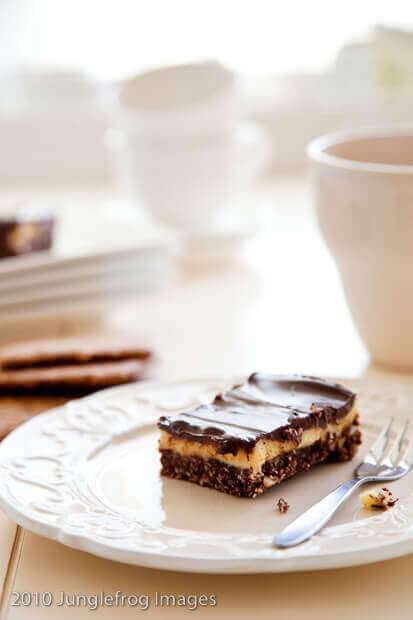 Making the graham crackers was really the biggest part of the work and the rest was pretty easy. I made the photos while the top layer of chocolate had not really been long enough in the fridge so it is a bit too moist still, but I totally loved the taste. As I said I am glad I added the lemon in there as that gave it a little bit of freshness with all the heavy chocolate in there. It is VERY filling and since I just had lunch I really only tasted a tiny bit. Tom did eat an entire ‘bar’ (the one in the photo) and he thought it was extremely good too.

Thankfully as we have quite some of it left… 🙂

So there you have it; the Daring Bakers January challenge; behind schedule but not too bad! I am happy that I still got to make them as I hate missing a challenge!!

If you want to keep with my changes then substitute the vanilla essence in the graham wafers for 2 tbsp of cinnamon essence and add to the middle layer about 2 large tablespoons of lemon curd. (BTW; I love lemon curd! I can still remember seeing it somewhere for the first time and buying a jar, not really knowing what I was gonna use it for, but I use it for soooo many things! Love it!)

So apologies for posting late. Will do better next time!