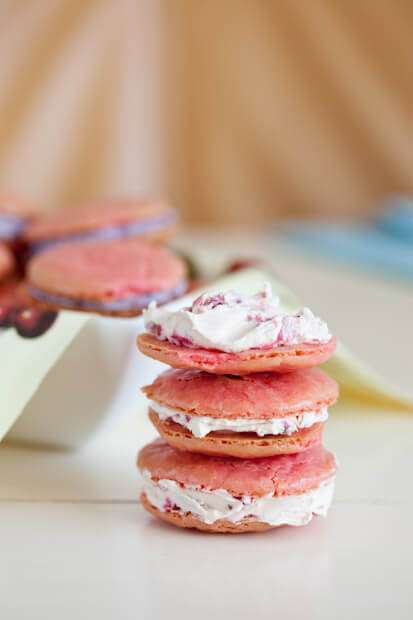 I want feet, I want feet, I want feet.. 🙁 But…. as you can see…. no feet (again) When I saw that the Daring Bakers challenge for october was making french macarons I figured I had a potentially good chance of succeeding. It would of-course be my fourth attempt at making macarons and with two fails and 1,5 success I figured it would be time for another little success… But noooo, it was not meant to be!

The 2009 October Daring Bakers’ challenge was brought to us by Ami S. She chose macarons from Claudia Fleming’s The Last Course: The Desserts of Gramercy Tavern as the challenge recipe.

The recipe that I normally follow is the one that I got from Helen (Tartelette) but Ami chose a slightly different recipe which didn’t involve drying the macarons prior to putting them into the oven, but instead baking them on a very low temperature first and then continuing the baking on higher. Which should basically get you the same result. Ofcourse the most important part would still be the macaronage and it appears I failed there again. Well, the good thing was that they did come off the baking sheet very easily (as you can see in some they are slightly browned due to their prolonged time in the oven) and they were absolutely delicious, so in that sense it was a success. And my friends wouldn’t notice that they didn’t have any feet, as they don’t really know the traditional macarons anyway, but I do so I was still slightly disappointed about the results.. O well, I will keep on trying!!

As for the filling; I made two different versions, one with red currants and one with blackberries. Both are combined with mascarpone which I think works beautifully with the macarons, but the blackberry filling came out looking very very lilac which didn’t really look very pretty with the pink macarons, but still nothing wrong with the taste.

I actually preferred the blackberry filling as I had also used lemon zest and since I love lemony flavours that was my favorite. Tom preferred the red currant one as it was less lemony 🙂 (is that even a word??) and you could taste the currants better that way. To be honest I loved them both and they were gone in a heartbeat so really that was the good part.

I do prefer the method that I am sort of familiar with now that is described here as for me that seems to get better results. Not perfect results (yet) but at least I had a few macarons with feet with that method as compaired to this method which had no feet whatsoever. It’s most likely entirely my fault since a lot of other daring bakers have made gorgeous looking macarons, so I am just bad at making them.

If you want to give it a try with this recipe here it is!