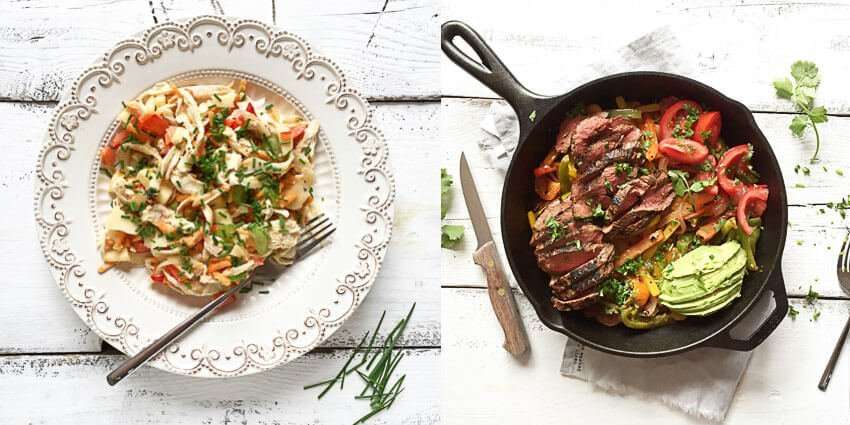 Ain’t the first day always the very very easiest? Full of motivation and still pumped to get started. Or at least that is how I felt on day 1. I was totally ready to get going and totally fed up with eating junkfood and eating unhealthy stuff and feeling crap. So that was a good beginning. I was prepared too: had bought all groceries the day before so the fridge was stacked to the brim with healthy veggies and fruit and a bit of meat. We started the day with a tortilla with spinach, bell pepper and avocado. That kept us going until lunch which was a proteinsalad with egg. Delicious! For dinner it was dudefood which you might see tomorrow online but a recipe by Steph Gaudreau from Stupid Easy Paleo. Beef fajitas without the tortilla’s. Loved it! Felt good throughout the day, even though I was really tired waking up. That obviously had nothing to do with the whole30 as we just got started. Possibly everything to do with the wine we had the last night and the junkfood… It was one of those “Last meal-things” Lol… 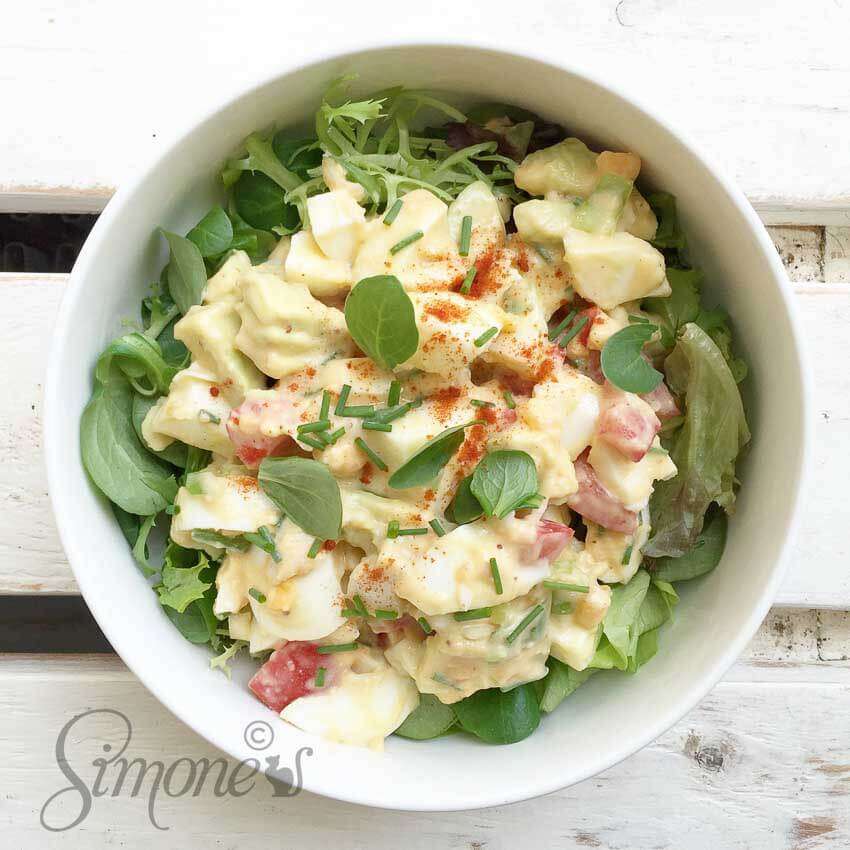 We had a day of today so we started slowly with breakfast in bed. Fairly similar breakfast to what we had on day #1, with the exception of courgette instead of peppers and more a shakshuka instead of whisked eggs. Pretty good anyway. I felt good, slept alright despite the cough I have had the entire week. Lunch was a chicken salad with fennel and dinner was roasted potatoes with chicken and a coleslaw. Delicious! 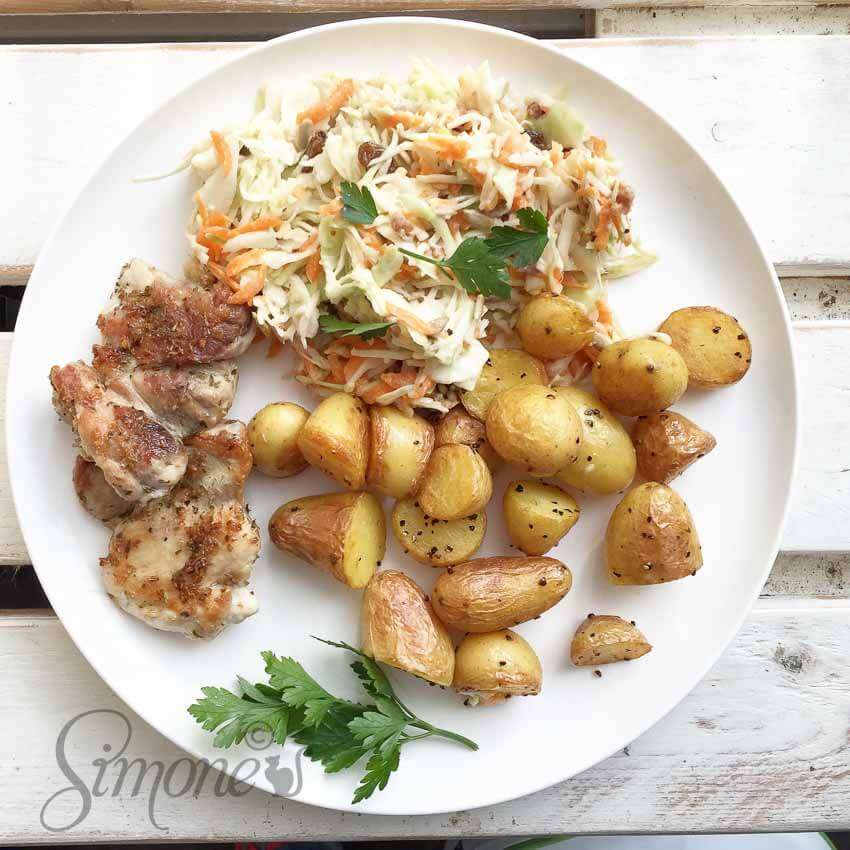 We both felt – even though in theory it’s probably weird – that our pants were slightly more loose than the day before. I guess we do lose a bit of ‘waterweight’ in those first days. That is always the case really (and I love it!) but it makes you feel and look less puffed up. So a good thing! All in all a good day. No headaches, slumps or anything major happening.

Slept pretty ok, especially since I’ve been sleeping rather badly ever since the accident. So that was good. Woke up feeling fine. The only thing that was a bit annoying was the fact that I had to pee three (!!) times in the night. Hate that, but I guess it’s part of the process. 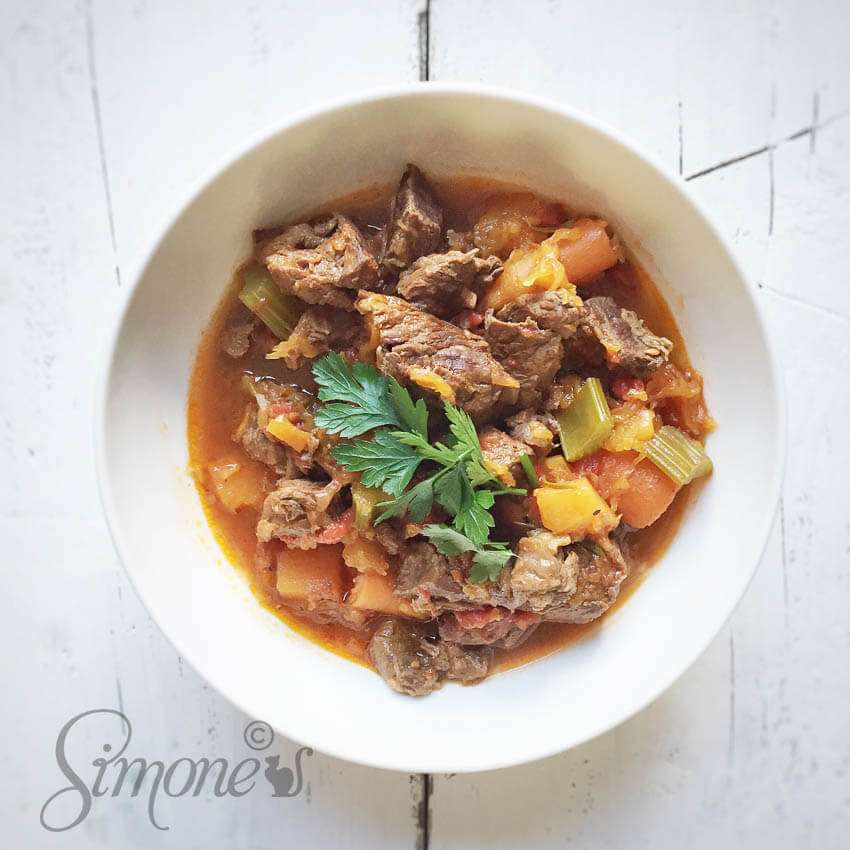 We had breakfast with leftover salad from yesterday’s lunch with scrambled eggs. I liked it but Tom didn’t so much. It was filling and satisfying anyway but I guess not the best combination. Lunch was tunasalad on salad wraps. Delicious! Dinner was a beef stew with pumpkin and carrots. Maybe weird to have a stew in the middle of summer but it was cold today so perfect for a stew plus I made extra for Tom to have tomorrow when I’m not home.  Something funny happened in the afternoon: Tom all of a sudden decided to start cleaning the shed, which was long long overdue and I started removing weed from the garden. Maybe not mindblowing but one of those tasks that we have kept postponing. Maybe it was a coincidence and not whole30 related but still… kind of funny. Tom was even commenting that he had much more energy and no afternoon dip. I kind of felt the same way.

Today was a tricky day as I had a press event for lunch and my dad’s birthday in the evening. I managed to get through it alright, but it was a bit difficult. First was the lunch and while they had salads and salmon, one bite of the salmon revealed lots of sugar and the salads did not do much better. One had chickpeas in there and corn, so the only one I could eat was a beet salad. Obviously I did take a little bit of that salmon and that did have sugar in it, but I guess in the grand scheme of 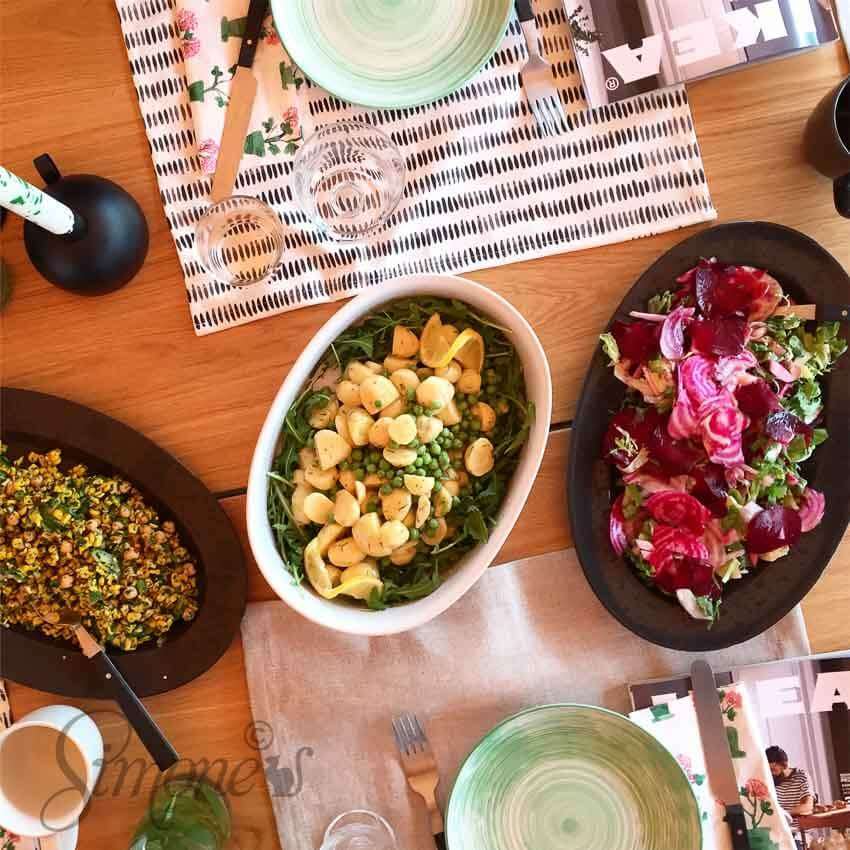 The salad that they put up for the event, of which not much was compliant..

things that doesn’t matter. I didn’t take anything else. Just stayed with the tea and water. Coming home I did make a tuna salad. Girl gotta eat right? I had that salad around 4 pm so quite late but I knew dinner would be tricky too. Technically it would be fine as we had dinner in a so called ‘wok-restaurant’ but the quality of food was not too good. I did have a piece of salmon and shrimps, but they overcooked everything and since I requested it without the sauce, they apparently figured I didn’t need salt and pepper either. So again, stuck to the veggies and had fresh fruit for dessert. All in all not a perfect day but I could have done much worse! So proud of myself for sticking with it!

At least there was fruit.. 🙂

I was slow waking up today. Which could either have something to do with the fact that the alarm went of at 5.15 am since Tom had to go away or with the whole30. Either way I felt better after a shower, as always. I had a fitness test at the gym at 9 am, which is also the start of my PT sessions. My cardio level was not too bad, but I seriously need to work on those muscles. No surprises there of course. She measured how many crunches I could do, how long I had to cycle before my heartrate to reach 130 BPM, how many pushups I could do (zero!) and so on. It’s the base level and the program is based on the first findings (Plus input from my physio too) Monday is the first training session, so that’s when the real work starts… Since Tom was having a market day I had already prepared lunch for him and myself the day before (which was this delicious protein salad so no work for lunch to do and dinner was slightly odd, I have to say. I roasted potatoes and baked a pork chop. I had new salt which is black as it has something with lava (can’t remember the details) and while it ended up being delicious it looked absolutely horrible. So I was so busy worrying about the pork chop that I forgot to add the vegetables. Oops…

Weekend! Can you believe my muscles are just a tiny bit sore from the fitness test yesterday? Lol… Can you imagine what will happen on tuesday after the first real session? O boy… But that’s ok. I can handle aching muscles.. better than inactive muscles right?

Slept real good again and woke up early as it is another market day again. Made a quick breakfast (scrambled eggs with spinach and courgette) that wasn’t very inspired but it was filling and better than nothing I assume. I plan on getting better at approved breakfasts this week, so hopefully it will improve.

Lunch was again already made as Tom had to take it with him and was a broccolisalad with turkey and carrot. Quite good I have to say… 🙂 Dinner…. pulled pork with roasted sweet potatoes… Now you wish you were doing a whole30 too right? 🙂 I did eat a bit too much and felt kind of stuffed.

Another early start this morning and we had the same – boring! – omelet with pepper and courgette. Slept reasonably ok, although a little less than the nights before. I had planned to make a salad for lunch including leftovers from the pulled pork and greens and apple and in theory it sounded much better than it actually tasted. It was nót good! Yuck. So I ended up having some random items for lunch. I did eat some of the salad but it was just not very good. So tossed it.

For dinner we had salmon with roasted cauliflower and that concludes our first whole30 week. It went quite well I think. No major set backs, didn’t feel all that awful and already feel better than before so things are going smooth. Hopefully the second week (mostly harder than the first) will be similar! I’ll keep you posted!