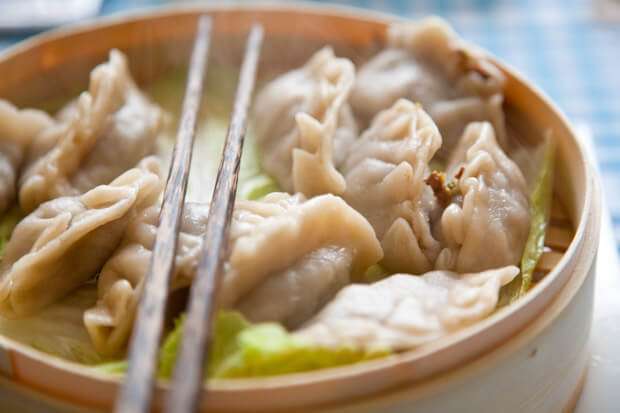 I was quite happy to read that the new challenge for june for the Daring Cooks was Chinese Dumplings. The challenge was hosted by Jen from use real butter, who is a master in making these!

I had made those once before during a chinese workshop although we did use the premade wonton wrappers to do so, which proved to be much easier then the handmade dough that we had to make for this new adventure… 🙂

I almost didn’t make it, as it has been crazy busy lately, but I finely managed to make them with the help of Tom. This to me is something ideally suited to do together, so one person can roll the dumplings and the other can fill them and pleat them. 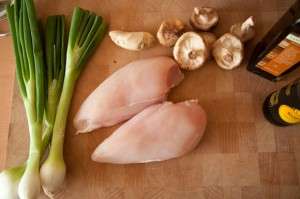 For the filling I chose to use chicken fillet rather then pork. The reason was that I wasn’t too sure what pork to use and figured I might as well use chicken. I used spring onions, cut down a little on the ginger as I know Tom is not a huge ginger fan and added the other ingredients for the filling pretty much as per the recipe. I minced the chicken in the Magimix, just to get it small enough and sticky enough. The rest of the ingredients were chopped by hand. Quite a lot of chopping but it’s ok to do. 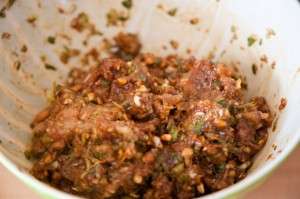 I was a bit worried that the finished filling was too wet, but it actually turned out delicious and great in texture, so that was all ok.

Now over to the dough; I put the flour in the magimix and added the warm water while it was turning. I kept mixing untill it was all incorporated as the recipe stated, but when I took it out of the machine it was incredibly sticky!! So I think I used a bit too much water, but that was easily (albeit a little messy) solved by adding more flour to the mixture. 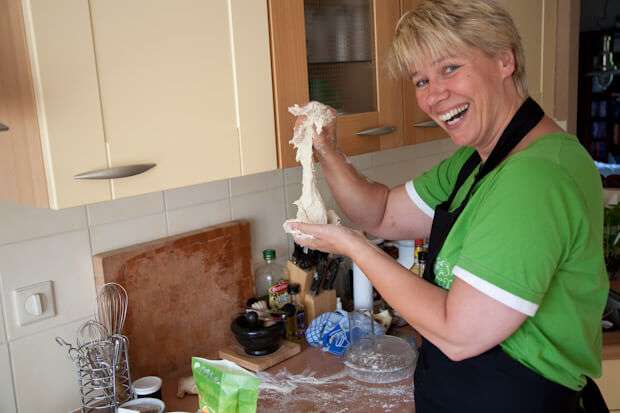 As soon as the dough became a bit more better too handle I popped it in a bowl to sit for 15 minutes.

Creating the correct size dumpling forms was actually not so easy. As it turned out we should have rolled the dough out thinner, as it was still a bit too thick, but we only noticed that really while eating them a little later. We started with rounds that were too small, then they were too thin and we ended by having them too thick… 🙂 O well, practice makes perfect right? 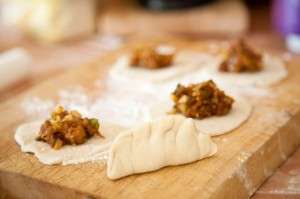 I found the pleating quite difficult and was very tempted to make a nice pattern with a fork instead. I’ve seen that many times in chinese restaurants and now I know why! It’s not entirely disastrous looking but I do think I have to make a couple of batches before being able to make pretty ones as Jen from Use Real Butter is doing so nicely!

We made them all with the same filling, as I made way too much filling for the amount of dough that we had, so that will have to find another destination, which shouldn’t be hard as it’s versatile enough to make into another kind of dish. I wanted to steam part of the dumplings and panfry the other part. I’m not a big fan of cooked dumplings so decided to skip that part.

I lined the cabbage in the steamer and forgot to oil it, which meant that some of the dumplings were a bit sticky after being steamed but not dramatically so I could still get them out. I think this would make a perfect starter if we manage to improve on our technique! I steamed the dumplings for 6 minutes and while I thought it would be too short they were actually perfectly done when I checked one. 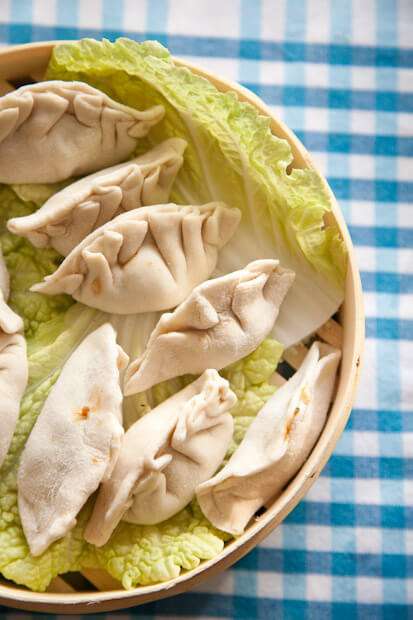 As you can see on the photo some of the dumplings have better pleating then others.. Haha.. 🙂

We did the other batch in the pan but the gas was on a little too high I think as it went too quickly and they almost burned. Not quite, so still very edible, but they are a bit dark as you can see from the finished photo further down below.

All in all a great recipe, which does need a bit of practice before we can safely serve this to guests, but I thought it was incrediby tasty and can see loads of other fillings that you can use with these dumplings. I want to also try if they would work if you deepfry them. Not sure if that would be tasty or maybe too greasy but I would love to have them brown all over with a crispy skin.

As I mentioned we made the dumplings too thick in terms of the dough so definitely something we need to improve on for the next time.

The panfried ones compaired to the steamed ones I thought that the difference was minimal, while the fatcontent of the steamed ones is so much lower, so that to me has the preference. Not a big taste difference but it could be that we did something wrong here. We will try again as this is for sure going to be a keeper! 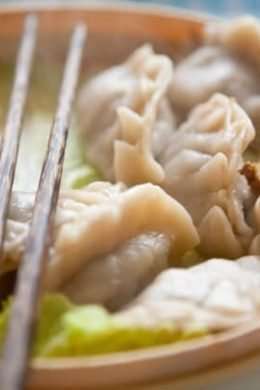 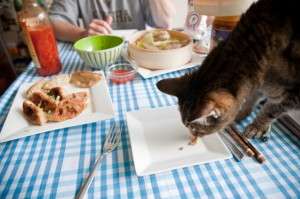 Now to finish this all off; Gizmo also thought that the dumplings were very tasty… Ofcourse she was only allowed on the table for a little while so I could quickly take a snap and then she was removed from the table!!