Recipe by ingredient » Chicken » Chicken on a stick and living leaner

Chicken on a stick and living leaner Now that the new year has started the term Living Leaner that Mona started on her blog Wisewords, takes on a bit of a double meaning for me. In fact, it takes on a triple meaning… I’m no different then anyone else around the world who wants to get fit and healthy in the new Year. Maybe with this difference being that I actually started right after Christmas (with just a short break at New Years) so this doesn’t count at all as a New Years resolution. I don’t do New Years resolutions so this just happens to be in the same period. And let’s face it, we’ve been here before now haven’t we? But in terms of living leaner; I could be a lot leaner myself and since Tom is still unemployed we have to live a lot leaner ourselves to. The budget has a limit!

And quite frankly, the way we were spending money before was – at some point – quite ridiculous. That’s the thing with having enough money; you tend to start living according to it. And that’s fine really but it also means that taking a step back is a bit harder. And it’s quite a big step back too. Finding a job in these days is hard. December is not the best month in any year to find a job but with the crisis everyone talks about, it is even harder. We’re still hopeful all will turn around soon but as of this month Tom is on unemployment benefit for the first time in his life (and I bet he also wishes it is going to be the last time too) And the worst thing is that we do not know at this point how much money we will have left. I have an irregular income and Tom will only hear at the end of the month how much his benefit will be. So we’re preparing for the worst case scenario, just in case.. 😉 That means that we’re on a tight budget. I do realize there are loads of people out there that have a far worse situation then we do, so believe me, I’m not complaining. I’m merely stating the facts. So that means that we have to also become a bit more creative with what we eat. Once a week (on saturday) we get a crate of organically grown produce including meat, vegetables, cheese, eggs etc. If we use it wisely it would be enough to feed us for a week if we add some extra’s to it such as pasta, spices etc. It’s always seasonal and local too. Going to the supermarket would possibly be a tiny bit cheaper but then I wouldn’t know where it came from and I would like to still support the local farmers where we can. And for now, we still can, so no reason to get rid of that. This particular meal does have a lot of ingredients but most of that we always have in house so there was no extra cost involved. The only thing I needed to buy was the chicken, the fennel, the salad and the oranges and the cost of those you see below. It was delicious, especially the marinade on the chicken gets high points. We had this with some plain rice as otherwise the meal would have been too light. And while I do want to lose weight, I want it to be sensible too!

And so you can all check how I’m doing I’ve added a little weight loss badge on the right in the sidebar… If it stays at the same number for too long, you can come and kick my butt! 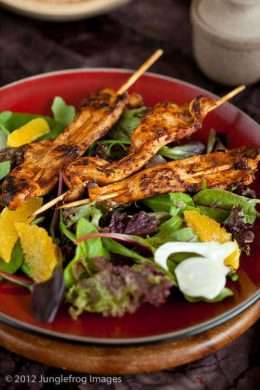 Obviously the salad leaves could have been cheaper had I used regular salad but these were bought for a photoshoot so I figured I might as well use them!