I was soooo looking forward to delicious and fluffy buns on the Sunday morning I made these, but…. unfortunately something went wrong along the way and I am not sure what, so I need your help! I am certainly not an experienced bread baker having baked bread only three or four times so far and well, all of those went fine, so this is the first time it was a failure… 🙁

Firstly I prepared the dough for these white buns the day before we wanted to eat them so on the saturday afternoon. I had heard that it would be ok to store the dough in the fridge until I needed, so I let it sit in the fridge overnight and took it out of the fridge the next morning. Now my guess is that I made some serious mistakes that same next morning…

You know how it is right; you wake up on a sundaymorning, hobble downstairs while Tom was still sleeping and I wasn’t much more awake either… I took the dough out of the fridge and immediately started with processing it further. My guess is that I should have waited until it wasn’t so cold anymore. Is that correct? Then I shaped the still cold dough into balls which didn’t really go very smoothly (again cold dough!) put them on a baking tray and had them rise for another 45 minutes. Now one of my not so good sides I guess, is that I become impatient quickly and early in the morning, 45 minutes is a hell of a long time!!

So after about 35 minutes I thought it should be enough and I popped them in the oven. Considering the fact that it was early in the morning and therefore the house had not warmed up a lot (still winter here!) I am guessing the buns didn’t get enough time to rise and not enough warmth either. I did cover them with plastic and a towel, but still…. And then… my lousy oven took a lot longer then the 15 minutes that it was supposed to take for them to come out all nice and brown. I mean; I have a thermometer inside the oven to make sure the heat is correct but still I always need mostly twice the amount of time for anything to be finished. It’s an old oven and it need of replacement, but since we are saving for a new kitchen… it’s gonna be a while before we will have one! In the meantime I will have to do with this one. So anyone, you can see they are still slightly pale and they must have been in the oven for about 30 minutes. I took them out thinking it should be enough but they were far too firm.

*sigh* So what did I do wrong other then the things I have already figured out myself? What is the ultimate secret to getting delicious and airy and fluffy buns?? I list the recipe that I used below… but I don’t think the issue lies with the recipe, but rather with me! I’ve added a few notes of what I did different compaired to the recipe 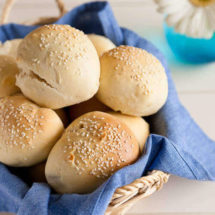