My blog is 1 year and lemon meringue pie

Seven years ago I decided it was time to start a blog… I had just started for myself as a photographer and the hip thing to do back then was to start a blog. Or in any case I was told, any self respecting photographer should have one. So I started Junglefrog Daily Adventures on the typepad platform. Not sure if there still is anyone who uses typepad but it is still around. I just checked. I had no idea what I wanted to blog about or what I should be blogging about and I couldn’t really share the photos I took of people in the studio, so the few posts I did where vague and had some flowers in it… I really had no idea… I did follow a few foodbloggers back in the day and one of them was Meeta from Whatsforlunchhoney… 😉 and I liked what she did. I thought it looked cool. I did like cooking and I hadn’t made any foodphotos at the time, so figured it would be something nice to try. I can’t remember what my first foodpost was exactly but I think it was something with raspberries in a glass. It had no recipe to go with it, just some random thought on the recipe itself. It was about the photo and nothing else. But as time progressed I started to get more and more involved in the whole foodblogger community and I loved it. I moved to wordpress and the new name of my blog was Junglefrog Cooking. And that stayed that way for about five years. In the meantime my work changed along with the blog and I still think I would not have done what I do today if it hadn’t been for blogging. All the practising with the foodphotos made me slowly move from regular photography to food photography. My first customer in that area was a lady who made cakes. And it also was – to date – the worst customer I have ever had. But that’s a sidenote.. 😉 Cakes have always been a big part of my job, mostly also because the ladies of Mjam Taart a cake magazine here in the Netherlands hired me to shoot their cakes from the first day of their existence and I still shoot for them today, five years later. Thankfully the focus has shifted from just cakes to anything really, anything food that is. I stopped shooting weddings, portraits, pets and products since about three years. Because my real passion turned out to be food and foodphotography. And so at some point I changed my company name from Junglefrog Images to Fresh Food Photos which made much more sense for a foodrelated business and that also meant that the blogname Junglefrog Cooking made less sense… I thought about it long and hard and in the end decided to change it all. Partially because I wanted to also start blogging in Dutch, after blogging in English for 6 years and I wanted to combine the two into one multilingual blog. I wanted to call it FreshFoodKitchen. I thought that would fit nicely with my company name, but – you guessed it – that name was already taken. So Simone’s Kitchen it was. At least I don’t have to tell anyone what my name is.. Lol.. So on June 6th the Dutch version of Simone’s Kitchen went live…. Whoohoo! And yes, as you know I also still blog in English but due to Simone’s Kitchen dot com being taken (I forgot to check that at the time!) I have name the English side In Simone’s Kitchen. Essentially it is one blog, running on WPML plugin…

Ofcourse it was a little confusing determining which birthday to celebrate. So eventually I decided it should be Simone’s Kitchen as after all, that is what it is right now. And yes you will find posts here that go back all the way to 2008 for the simple reason that I hate to throw that history away. Most of that is in English, some is translated.

And to celebrate I have this delicious Lemon meringue pie for you. Truth be told I did not make this myself as I am trying to eat healthier and cake doesn’t really go so well with that so I used the recipe I photographed a little over a year ago for the Bazaar cookbook by Sabina Posthumus. So it’s cheating a little but it is not any less tasty! Enjoy! 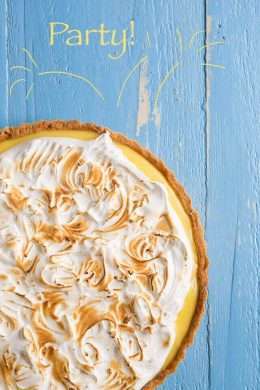