Travel » North- and South America » The Best of San Francisco

The Best of San Francisco

The best of San Francisco by Tina Lee

The first guestblog by Tina! Tina is the daughter of the wife of Tom’s brother (eh… that’s my sister in law, right..lol.. I always get the family relations mixed up. Does that make Tina my niece?) No matter what the family relation is, Tina is a wonderfully creative spirit. She has recently launched her own company in Australia with the wonderful name of  ‘No More Ugly‘ where she sells gorgeous camera bags and soon there will be more things and hopefully soon also camerabags after her own designs. Can’t wait to get my hands on one of those. Tina lives in Australia so she will be mostly sharing tips and things to see and do in Sydney and about. But her first post is about San Francisco. Enjoy!

San Francisco has won my heart, and not because it is home to the burrito but because when you start exploring the city beyond Fisherman’s wharf and clam chowder, you discover so many gems that truly make you fall in love with the city.

The Mission District – A diverse neighbourhood, home to a lively Latino community with late-night taquerias left, right and center as well as quirky stores and coffee shops like Four Barrel Coffee. The Mission is home to the first Burrito ever. Yes, it was born in the United States. I stayed in the Mission, on Valencia street for a week and felt like I could have stayed there for 4. There are so many cafes, bars, restaurants and shops to lose yourself in and you get a serious case of fomo (fear of missing out) if you can’t check them all out. The two most memorable stores for me were the Taxidermy store filled with stuffed animals and glass eyes, and San Francisco’s only independent Pirate store.

San Francisco’s streets (especially around the Mission District and Hayes Valley) are rarely empty. There are always posters or street art keeping the walls filled with personality. You’ll also feel the energy and personality resonate in the Castro district which is one of the first gay neighbourhoods in the United States. Make an effort to look up, down and in every other direction whenever you’re exploring the streets!

Apparently partying with jelly fish is a thing. Every Thursday night at the California Academy of Sciences, the Nightlife event invites you to boogie amongst safari and aquarium animals with a drink in hand and a DJ spinning his decks. It takes a while to adjust to the fact you are dancing in front of a jellyfish tank while lining up for gourmet hotdogs just two minutes prior.

The thing I love about San Francisco is how easy it is to escape the city and explore the beautiful scenery that the Bay has to offer. Tank Hill is a lesser known view point that is just as good, if not better than the busier Twin Peaks. Both are perfect spots to absorb the beautiful views of fog city, reminding me a lot of Sydney.

Regardless of how ‘touristy’ it might be, it’s imperative to hire a bike and ride across the Golden Gate Bridge and down to Sausalito for lunch by the water. For someone who has a love hate relationship with a bicycle, it was one of the most memorable activities of the trip, albeit a very sore booty the day after. 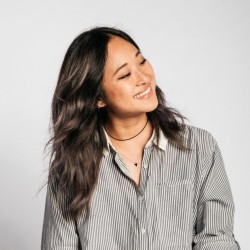 Tina is the founder of Sydney based brand No More Ugly, whose mission is to rid the world of ugly one thing at a time. She loves exploring her city and discovering hidden (or not so hidden) gems from coffee spots to street art walls. She is often found drooling over peanut butter recipes and minimalistic design. She hopes she could one day make travelling her job!

2 comments on “The Best of San Francisco”