I did promise you I would try and make some authentic Costa Rican food right? And although arroz con leche seems to be pretty much used in most latin american countries plus Spain… it is still one of the dishes that I associate with Costa Rica. Plus I like it.. 🙂

We’ve only eaten this particular dessert on two occassions while in Costa Rica and as good as the first one was, as bad as the second one was. So even with a dish as simple as dish you can still go terribly wrong. It’s a versatile dish as you can add raisins, banana or any other fruit to the dish. The taste is sweet but neutral so it will work with loads of different things as well. For today I kept it simple. I checked on the internet and I checked in the book that I bought for a good recipe of arroz con leche and there are as many recipes as there are people, I would almost say. A lot of them use condensed and/or evaporated milk. Since I didn’t have either, I made a version with just regular milk. When going through my cupboards I also found out that I had ran out of most of the rice I usually stock! I think this will work extremely well with arborio rice and I wanted to try that but I only had pandan rice left. And since I didn’t feel like going to the store I used that.

I am thinking that it will be creamier when you do use arborio rice, but it tasted lovely with the pandan. I will try it at some point with different rice and maybe with different ingredients as well. For now, this is what I used. It’s enough for two small bowls. 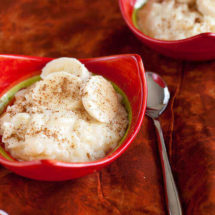