Apple and caramel dumplings, I think

Sometimes, just every so often, you try out a recipe and it is just plain wrong… I had never before have that happen with a Donna Hay recipe, so I guess kudos to their team for testing most of their recipes. And I say ‘most’ because the recipe I picked for this months Donna Hay Challenge is certainly NOT right. I was alerted to the problems initially by Laura from the blog Tiramisu who had tested it to see how it would look and it turned out the caramel sauce stayed far too watery to be considered a sauce. So I tested it too and indeed, it was nowhere near the right consistency of a sauce. Plus, due to the watery nature of the caramel the dumplings became very soggy in the oven.

So I thought about it, tweeted a bit here and there with Jenn, Astrid and Alessio and I decided in the end I would split up the components of the recipe and make them separate. I still had some dough leftover from the dumplings, so I used those to make 5 small dumplings and baked them in the oven for about 25 minutes. I poached the apples on the stove in a mixture of sugar, verjuice and water with cinnamon, cardamom, staranise and cloves and made an orange caramel sauce to go over the finished product.

And while all the separate components worked really well this time, the end product was too sweet. Initially I thought that I should have poached the apples in a sugarless solution but I don’t think that the apples were the problem. The caramel, while delicious, would probably be better for an creamy dessert. The dumplings soaked it up quite well so they too, became too sweet. Pfft, what to do now? I’m thinking the solution might be to change the water qty in the original caramel recipe (which was great in taste, just too soggy) and add the butter into the caramel at a later stage. Anyone any thought on how to resolve this? It’s quite a tasty recipe otherwise, it’s just too soggy, that’s all…

I will share my take on the recipe with you below but first let me get into the photo process here. Based on the original photo I used a table with backlighting as you can see in my setup. Apart from the obvious differences in props for me the biggest difference is the texture. The recipe does not state to add sugar to the dumplings but that is clearly what they did in the photo. Also I did not have small apples, so I used bigger ones and cut them. As soon as you poach apples, either in the oven or in a pan the color starts leeking out of them. So while they were quite red at the start; it soon turned rather yellow. I wish I had small apples and if I do manage to find them I might make this again.

See how the texture of the sugar on the dumplings and the more wrinkled appearance of the small apples adds a really pleasing contrast to the tin they serve the apples in? In my photo it is all too smooth. Also because I did not want to overcook the apples and have no color at all left.

To reflect some of the light back onto the apples I used my foamboard wrapped with aluminium foil plus the lid of a pan. I could not – for the live of me – find my reflector, so that is probably still in the studio.. 🙁

I will now share how I prepared this, but for the original recipe best look at the Donna Hay post. I would love to hear your thoughts on the recipe and the problems you encountered while cooking it!

I used the recipe for the dumplings as per the original, but baked them separately in the oven at 180C for 25 minutes.

I poached the apples in a liquid containing verjuice and water, about 1/2 cup of sugar, 2 cinnamon sticks, 2 staranise, 5 cardamom pods (crushed) and 3 cloves. I brought the liquid to the boil, added the apples and simmered for about 15 minutes. 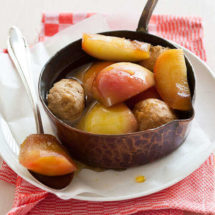