If you’re looking for a bread that is gluten free and paleo proof? Look no further. This almond vanilla sponge is the perfect bread to eat if you are looking to eat more paleo foods.

Yes, it’s officially over, our whole30 adventure…. Officially over but that doesn’t mean we’re straight away going back to our bad habits of before. I’m still debating endlessly with myself on the pros and cons of paleo. The pros are all health related and truthfully it makes me feel very good, I’ve lost 6 kilo in the last month without really thinking about it (so that makes a total of 14 kilo I lost since March! Whoot!!)

And in general I sleep like a baby, feel energized and good all day long so those are all plus-things. On the downside there is this nagging feeling in the back of my head that I’d hate to be doomed to never bake or eat a bread again…. Never eat or bake gorgeously decadent cakes again… That’s just something I cannot fathom….

So I start to wonder if it is any point following a paleo diet if you do it only most of the time. Would I still get the same health benefits if I follow it 80% of the time but occasionally go out for a wonderful dinner and eat whatever I am not supposed to eat? If I bake a glorious chocolate cake with sugar? Or have a bowl of pasta? Would that still work? Or would I undo all of the good stuff by that one sidestep?

I understand I shouldn’t be baking those cakes or eating that pasta daily or weekly but I’m just wondering, in general, how that would work.
You hear a lot of people saying they follow the paleo principles 80/20. I could live with that but I do wonder what would happen, if I do eat a little bit of that glorious cake or even lick the spoon…:)

Anyway, in order to expand my paleo knowledge and options I decided to try baking within the rules of paleo and my first attempt is this almond vanilla sponge, which – in all fairness – needs a bit of work. It’s good and tasty and fresh out of the oven it tastes delicious with some juicy strawberries. However the next day I toasted it and had it with a boiled egg, but it was fairly dry so I’m gonna try some variations to this.

The recipe for the almond vanilla sponge itself is very simple and requires a short amount of time in prep, so it’s easy to whip together and I’m guessing it is easy to vary with the ingredients. 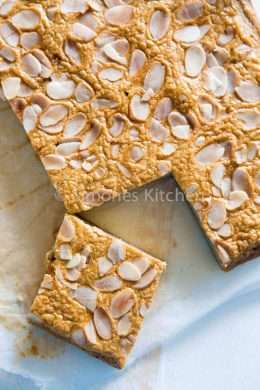