When you think about it; how many brownies did you eat in your life that were really really good and how many did you eat that were just less then perfect? If I think back on the countless brownies I’ve eaten (no wonder I have the hips I have!! 🙂 ) there are only a few that were really really good. The majority was either too dry, wrong taste or just plain awful in general. So it would appear that making a good brownie is not as simple as it may look.

We were having our neighbours over for drinks so I figured baking something good but not too complicated was in order. And these almond brownies were the first thing that popped into my mind. Now I have to confess that I had only once made brownies myself before and those were from a ready made brownie mix…

Far too sweet but we used them for a photoshoot centered around two girls baking. And since neither of the girls that were the models were into cooking, I figured it would make sense to not make it too complicated. Hence the prepackaged goods. I know… I am not proud of it either..

So almond brownies it was gonna be. I had just gotten the book Kitchen from Nigella Lawson which has brownies in it but the recipe didn’t really strike my fancy (although I am sure those were really good also) and I wanted something else.

My first thought was to turn to the blog of my dear friend and wonderful baker Jamie from Life’s a Feast. If you know her blog, you also know she has some fabulous recipes on it, so I searched and I wasn’t disappointed. The recipe for her amaretti brownies with amaretto immediately hit home and I did not need to search any longer.

Baking them was a breeze and the smell coming from the oven while they were baking was incredible. The taste was even better! These are brownies the way brownies are supposed to be; crunchy crust on the outside and moist and delicious on the inside!

ALMOND BROWNIES WITH AMARETTO (from: Life’s a feast) 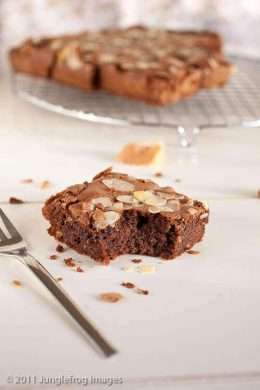